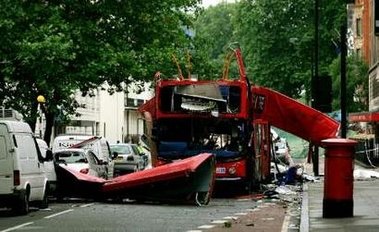 Today is the first anniversary of the July 7 bombings in London, which killed 52 people and injured hundreds more on the city's bus and subway network.

Here's a roundup marking the occasion:

* CNN follows the many events in London, including wreath layings, the unveiling of commemorative plaques and the ringing of church bells. Go here for coverage.

* The Washington Post reports that Londoners are being warned that the threat of new attacks is growing. Go here.

* The BBC asks its viewers and listeners what lessons have been learned in the year since the catastrophic events. Go here.

* Al Jazeera television shows a video that appears to be the last testimament of one of the four London bombers warning that, "What you have witnessed now is only the beginning." The New York Times has more here.

* The impact of the blasts was most certainly felt in Beeston in south Leeds, home to two of the homegrown bombers and a near the home of a third. The Guardian has put together a terrific package of photos and interviews with Beeston residents here.

* Finally, Pajamas Media has a roundup of its own. Go here.


QUOTE DU JOUR
It is worth recalling London Mayor Ken Livingstone's stirring warning to terrorists of one year ago:

Posted by Shaun Mullen at 6:02 AM
Email ThisBlogThis!Share to TwitterShare to FacebookShare to Pinterest