Rick Santorum Pisses In His Own Hat 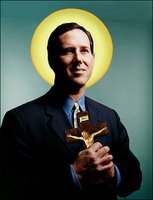 Rick Santorum, the wingnut Republican senator from Pennsylvania, has been particularly vicious in his attacks over the years on anyone he doesn't consider to be adequately righteous, including liberals and gays, so the turnaround of his fortunes this election season is especially welcome.

The Democrats smell blood and he has is trailing Democratic challenger Bob Casey Jr. by up to 20 points in some polls, making him the most endangered senator in the country.

Rick has problems on his problems. Thanks in large part to my buddy Will Bunch, a Philadelphia Daily News blogger and contributing writer for national magazines, the world now knows that Santorum is a stinking hypocrite of overweaning gaul.

Santorum, it turns out, lives in a McMansion in suburban Washington, D.C., that he financed with through a sweetheart deal with a bank for millionaires and in more modest house outside of Pittsburgh, which while his address of record, is his mother's home.

Will also has outted Santorum here and here for comingling lobbying and charitable work, which ended the choirboy's brief tenure as the Senate Republican point man for lobbying reform (sic).

Stir in Santorum's occasional Looney Tune statements like his contention that the liberal brahmans of Boston made all those Catholic priests in Boston become drooling pedophiles and you've got a great opportunity to knock off a right-wing Republican incumbent from a state that consists of liberal Philadelphia to the east, moderate Pittsburgh to the west and conservative Mississippi in between.

The best indication that Santorum is running for his political life are TV and radio commercials in which he advocates locking up illegal immigrants and brands Casey, his opponent, as a flaming liberal who is in bed with Teddy Kennedy.

Illegal immigration is not a hot-button issue in Pennsylvania. Health-care reform and relief for squeezed middle-class homeowners are.

So the ads reek of the kind of desperation you see in a candidate's advertising a few days before an election, not four months. Besides which, they're been aired in the Kiko's House TV market and as someone with three grandparents who were emigrees and struggled to make it against formidable odds, I find them highly offensive.

Well, it turns out that Arlen Specter, Pennsylvania's other senator, is in bed with Ted.

They are co-sponsors of kinder, gentler immigration reform legislation that is not predicated on locking up everyone who doesn't have a green card, as well as their priests and social workers. Specter, who also is a Republican, harrumphs that Santorum "is entitled to his views."

The last man standing after Election Day is looking more and more to be Casey, who like Santorum is a Catholic, a conservative and anti-abortion.

Santorum is so loathed by women's groups for his attack dog demeanor -- now conveniently tucked out of sight because he's become the major campaign issue -- that these groups have done the unthinkable:

Posted by Shaun Mullen at 4:40 AM
Email ThisBlogThis!Share to TwitterShare to FacebookShare to Pinterest