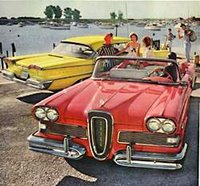 Here are the Seven Deadly Sins in ascending order of severity:

Year after year, Ford and GM both coveted the title “America’s Best Selling Car” so carnally they dumped cars into the rental and fleet markets to inflate their sales numbers. This succeeded in flooding the market with used cars, trashing resale values and destroying what reputation for quality they might have had. Now their products are associated so strongly with “rental car” and “fleet” many buyers won’t consider buying anything they make.

In an attempt to expand their worldwide empires they both hungrily bought up other companies around the globe, totally oblivious to what it could cost them down the road. As a result Ford keeps pouring piles of money into that black hole called the Premier Auto Group and GM is still reeling from the Fiat fiasco. You can’t post profits very long when your feeding frenzies culminate in flushing billions down the corporate toilet.

GM is the champion at stretching out product cycles to try to squeeze every dime out of an old design instead of investing money on product development (look up “hoary” in the dictionary and there’s a picture of the Cavalier). Ford puts all their best efforts into designing and producing high profit trucks and SUVs while ignoring and all but abandoning the much lower profit margin vehicles in the passenger car market. In the short term this kept expenditures down and the bottom line up. Today both have milked their cash cows dry and are standing by, watching helplessly as a whole bevy of modern subcompacts come ashore and roll into the awaiting arms of economy-minded consumers.

Detroit has gotten lazy over the years. Domestic car makers spend much of their time whining, dragging their corporate feet, and having to be forced into complying with inevitable federal regulations and fuel standards. The manufacturers of imports quietly and industriously go about engineering innovative solutions to meet these requirements. Detroit was once the world leader in automotive technology and innovation. Now they license technology from the Japanese and bring out new models one product cycle behind the rest of the world.

Since they seem to be incapable of beating the Japanese nameplates with competitive products consumers actually want to buy, execs from both companies are directing their vituperation towards those who purchase any vehicle not built by them. They’re out making flag-waving speeches and running ad campaigns designed to make anyone who drives anything "foreign" look anti-American and portray them as a threat to the very foundation of the economy. Most consumers see this for what it is – a last-gasp effort of an ailing industry and the backlash may cause more damage than the speech writers ever imagined.

The Japanese automakers are much better than either GM or Ford at producing and selling what was once Detroit’s bread and butter. Now they realize what they gave away and can’t stand someone else having it. They want it back very badly. But instead of working hard to retake it by producing competitive products, they cry “no fair” and go running to Uncle Sugar for government protection and corporate welfare.

Hubris reigns in Detroit. For years GM was smug in their belief “as goes General Motors, so goes America.” Ford went around thumping their chests about having the best selling vehicle in the country and resting on their laurels. Both totally ignored the warning signs of impending disaster, thinking they were immune to the basic economic principles of supply and demand. Sadly, both were wrong.

I grew up in tiny , a state where license plates with low numbers are resold for outrageous prices.

Now the Chinese have caught license plate fever, with government officials in recently auctioning off several hundred plates for a total of $366,500.

Unlike those low number loving Delawareans, Chinese drivers are more interested in “special” numbers. The top selling tag at auction was AC6688, which fetched $10,000 because 88 is considered a lucky number. APY888 went for $6,750, or almost 20 times what a Chinese farmer earns in a year.


Rep. Dan Lungren, a California Republican, has a neat idea:

The U.S. government should offer a $1 billion prize for the first American automaker to sell 60,000 midsized sedans that could travel 100 miles on one gallon of gasoline.

Lungren notes that it wouldn't be a panacea for our energy problems, but it would stimulate the development of viable technologies to reduce oil consumption while we develop alternatives to petroleum.

As a public policy matter, this steady decline is a vindication of the repeal of the 55 miles per hour federal speed limit law in 1995. That 1974 federal speed limit was arguably the most disobeyed and despised law since Prohibition. "Double nickel," as it was often called, was first adopted to save gasoline during the Arab oil embargo, though later the justification became saving lives. But to Westerners with open spaces and low traffic density, the law became a symbol of the heavy hand of the federal nanny state. To top it off, Congress would deny states their own federal highway construction dollars if they failed to comply.

. . . We now have 10 years of evidence proving that the only "assault" was on the sanctity of the truth. . . . death, injury and crash rates have fallen sharply since 1995. Per mile traveled, there were about 5,000 fewer deaths and almost one million fewer injuries in 2005 than in the mid-1990s. This is all the more remarkable given that a dozen years ago Americans lacked today's distraction of driving while also talking on their cell phones.

Of the 31 states that have raised their speed limits to more than 70 mph, 29 saw a decline in the death and injury rate and only two--the Dakotas--have seen fatalities increase. Two studies, by the National Motorists Association and by the Cato Institute, have compared crash data in states that raised their speed limits with those that didn't and found no increase in deaths in the higher speed states.