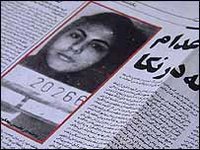 On August 15, 2004, 16-year-old Atefah Shaaleh was hanged in a public square in the Iranian city of Neka.

The death sentence was imposed for her "crimes against chastity."


The state-run newspaper accused her of adultery and described her as 22 years old, but a she was just 16.

Atefah had been arrested at age 13 by the morality police for attending a party and being alone in a car with a boy. She spent a short time in prison and received 100 lashes.

Soon after her release, Atefah became involved in an abusive relationship with a man three times her age, Ali Darabi, a 51-year-old former Revolutionary Guard and a married man with children, who raped her several times.

She kept the relationship secret but soon was caught in a downward spiral that led to her arrest and hanging. Only China executes more people than Iran.

In the year of Atefah's death, at least 159 people were executed in accordance with Sharia code, the Islamic law of the country.

More here from the BBC.
Posted by Shaun Mullen at 3:44 AM
Email ThisBlogThis!Share to TwitterShare to FacebookShare to Pinterest