Is Annie Just Phoning It In? 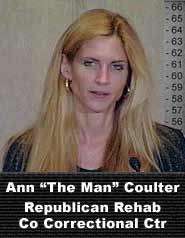 There is a dramatic new development in the saga of Ann Coulter, the self-loathing fascist right-wing Republican newspaper columnist and best selling author, who has been accused of plagarism.

I'm giving credence to this development because it comes from the keyboards of some of Coulter's sworn enemies:

They say that aside from the fact that what Annie writes is trash, she isn't a plagarist, just a lazy and unimaginative writer.

If that isn't damning with faint praise I don't know what is. I do know that there is a term in the newspaper business for reporters who do the minimum when going after a story:

It's called "phoning it in."

So maybe I should give Annie the benefit of the doubt, as does no less a figure than The Koz, who posits his view here and then feeds it to the sharks in his blogoon, more than a few who note that the whole kerfuffle is yet another distraction for the clueless liberal wing of the Democratic Party that should be sharping its axes for the coming crusade . . . er, election.

Or maybe I shouldn't give Annie the benefit of the doubt.

Where I come from, it's not okay to take someone else's ideas, rephrases them a bit, and pass them off as your own without attribution, which seems to pass The Koz's smell test.

Pat on Back Alert: That's why I'm careful to attibute my own ravings at Kiko's House when they are based on another's. And always give a hat tip to a fellow blogger when I use one of their items.

If you're wondering what the heck this is all about, go here for lotsa background.
Posted by Shaun Mullen at 2:43 AM
Email ThisBlogThis!Share to TwitterShare to FacebookShare to Pinterest