War on Terror I: The Old Bait & Switch 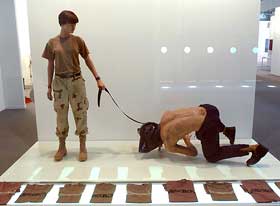 As Kiko's House predicted only yesterday, the Bush administration is indeed merely paying lip service to abiding by the U.S. Supreme Court ruling that found illegal its tactics in the War on Terror and will try to restore as much as its old my-way-or-the-highway system as it can get away with.

The Pentagon had no sooner announced that detainees at Guantánamo Bay would be treated in compliance with the Geneva Conventions than administration lawyers marched up to Capitol Hill and said in no uncertain terms that the White House wanted:

* Legislation passed that would severely limit the rights granted to detainess.

* Restoration of the use of the military tribunals that the high court had ruled were unconstitutional.

The perniciousness of the adminstration's bait-and-switch tactics was lost on the mainstream media.

First the MSM fell all over itself in describing as a retreat President Bush's statements that he would abide by the sweeping Hamdan vs. Rumsfeld ruling.

Then it realized that it had been diddled and sought cover by seeking out Republican legislators who mumbled that that the administration had not contradicted itself but was merely refining its views.

The White House spin . . . is another example of the self-contradicting ambiguity that has been a hallmark of this administration's position on torture and inhumane conduct.

On the one hand, the spin suggests that the administration has no intention of revising the policies that have been in force during a sordid cavalcade of incidents that have shocked the conscience of ordinary citizens.

And on the other hand, it contradicts the administration's previous, passionate insistence that granting the convention's protections to suspected terrorists could, in some cases, conflict with what it has called military necessity.

The White House's adherence to undefined and yet seemingly inconsistent rhetoric should come as no surprise to anyone who's been following this story.

At this juncture and to no one's surprise, the Republican knuckle draggers in the House are willing to give away the candy story. The White House asketh and they obligeth.

Rep. Candice Miller, a Michigan Republican whom no one would confuse with a braniac, said that Hamdan was:

Incredibly counterintuitive. We could just ratify what the executive branch and the [Department of Defense] have done and move on.

That would be a very desirable way to proceed.

It's another story over the Senate, where seem to be more brain cells per lawmaker and a willingness to put whatever work is necessary into drafting legislation that is absent in the slower, er . . . lower chamber.

Key Senate Republicans are signaling that they want to take existing laws, as well as the Uniform Code of Military Justice, and adapt them to present circumstances, not merely do the White House's bidding.

In any event, the reality is this:

The administration has not taken seriously an historic Supreme Court's ruling that it has been walking on the wild side of domestic law and international treaties.

It has not taken seriously the admonitions of the military's former top lawyers that to torture detainees invites the same treatment of captured Americans.

And it has not taken seriously the outrage and disgust that I and many Americans feel over the hash that it has made of protecting the homeland and upholding core American values.

In the end, "human treatment" is defined by the Bush administration as what it wants to do not what it is obligated to do.

In other words, it's business as usual.

WHO NEEDS THE GENEVA CONVENTIONS?
The xenophobes at The National Review have a simple but extraordinary way out of the post-Hamdan thicket:

More here.
Posted by Shaun Mullen at 7:32 AM
Email ThisBlogThis!Share to TwitterShare to FacebookShare to Pinterest