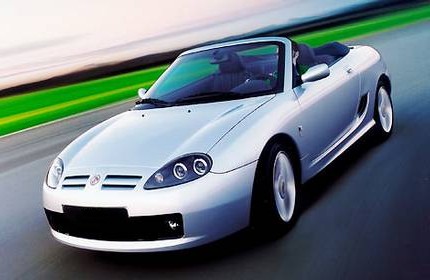 The MG TF Roadster: Made in Oklahoma, bankrolled in Beijing
As far as I'm concerned, the MG is the poster child for the decline and fall of the once proud British automotive industry.

My first out-of-body automotive experience was as a young teen invited to ride shotgun in a neighbor's brilliant red MGTD ragtop with those classy leather straps on the boot. Ever since then, I've loved the legendary marque through thick and thin -- mostly thin considering that MG was either out of production or on life support for many years.

MG finally went belly up last year when the MG Rover Group went bankrupt, which was a shame because it was offering a new generation TF roadster that was attractive and zippy. Unfortunately, there wasn't enough dough to federalize the car to meet U.S. safety standards, so none were imported into the world's largest market.

While no one was looking, the Nanjing Automotive Group of China bought up MG Rover's assets and has been quietly working to open a factory in Oklahoma to manufacture a TF coupe, which will compete in the $20,000-plus price range with the Mazda Miata.

Look for a rollout sometime next year.

Maybe I'm just stoopid, but for the life of me I can't understand why Nissan and Renault are interested in forming an alliance with General Motors.

GM's core problem is not overcapacity or an underfunded pension plan, although both are exacerbating its tenuous financial situation.

The General's core problem has been and continues to be that it makes boring cars.

Nissan and Renault are not exactly setting the world on fire either, and a collaboration with GM isn't going to address that problem.

In fact, the modest financial relief that a three-way partnership would afford GM would be a perfect excuse for it to keep its head in the sand and further expose its big butt to Toyota and other comers.

For its part, GM is sort of kind of playing hard to get.

The alliance is being pushed by the company's biggest shareholder, gazzilionaire financier Kirk Kerkorian, who has been impatient with the pace of GM's turnaround and has not made a cent on his 56 million shares. It is an open secret that Kerkorian would not mind seeing GM chairman Rick Wagoner replaced by Carlos Ghosn, the Nissan-Renault CEO, but Wagoner for his part says the General can go it alone.

That may be true, but only if the clueless Wagoner is shown the door. Please!

A partnership with the Japanese and French firms also sends the wrong message to GM's shrinking base:

Its Buy America First customers will assume that GM is in such a weakened state (which it is) that furriners are intent on taking over one of the last two Motor City automakers not already controlled by them (which they may be).

And they'll think that it's only a matter of time before Chevy Impalas have Nissan powerplants and Renault bodies. Oh for shame!

Merrill Lynch analyst John Murphy has looked into its crystal ball and this is the future he sees for the world's automakers, according to Fortune magazine:

The winners, maintaining their momentum, are Toyota and Nissan. The Koreans have a hit a dry patch and Honda is unexpectedly barren.

But the big losers - no surprises here - are General Motors and, bringing up the rear, Ford. By the end of the decade, the market share of Ford, currently number two in the U.S., could fall below both Chrysler and Toyota.


NOT WHAT THE DOCTOR ORDERED
American motorists looking for relief at the pump are suffering a double setback with oil cruising toward $80 a barrel because of tensions in the Middle East and another round of pipeline explosions in Nigeria.

Geopolitical risk is out of control. There's a pipeline attack in Nigeria, Israel is taking a strong stance and that's adding fuel to the fire, but more than anything it's U.S. gasoline demand holding up and the Iran situation.

The latest development in the Iran "situation" is a declaration by President Mahmoud Ahmadinejad that the world's fourth-largest oil exporter would not abandon its right to nuclear technology after Tehran's case was referred back to the U.N. Security Council over its nuclear dispute with the West.
Posted by Shaun Mullen at 4:43 AM
Email ThisBlogThis!Share to TwitterShare to FacebookShare to Pinterest

nice carss...mgs and nanjing are going to make it this time