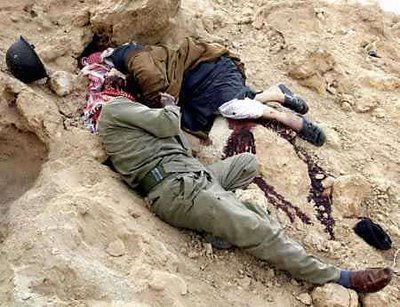 United in Death: Two of 6,000 Iraqis killed in the last two months
The gloom over the war in Iraq has become so deep that the best that the chest thumpers on the Wall Street Journal editorial board can do is trot out the same failed alternatives to what it calls "pre-emptive retreat."

In rejecting former diplomat Peter W. Galbraith's proposal that Iraq be allowed to morph into sectarian regions like the Kurdish north which I detailed here, the best the Journal could come up with was:

Increasing the number of U.S. troops in Baghdad.

Reining in the Iraqi leadership when it doesn't toe the U.S. line.

KILLED FOR NO GOOD REASON
Fatima, noting that 6,000 Iraqis have been killed in the last two months, is not impressed with the new plan to crack down on militias in bloody Baghdad.

Writing in Thoughts From Baghdad, she says of the carnage:

That's a crazy number of innocent lives extinguished for no good reason. No regard for human life and their God-given dignity. No regard for the rules of man and even less for those of God. And all of this a result of the chaos that has engulfed Iraq in the aftermath of its "liberation" by the US of A. All of this a result of the misplanning of one group of policy makers and the ignorance of another. All of this under the new "security plan" that [Prime Minister] Maliki thought would save Iraq. The security plan whose most palpable effects on the regular Baghdadi are the greater number of security checkpoints (hence, traffic jams) and the curfew starting at sunset, 8:30 pm, too early for people who need to go out and do something different, despite of, or because of, the suffocating circumstances they live under.

IT'S A START
In a bit of good news, Mohammed at Iraq the Model reports that while national efforts to forge a reconciliation plan are bogged down, local initiatives are moving forward in some Baghdad neighborhoods:

Such practices have increased recently and taking the form of basically meetings between community leaders and tribal sheikhs of often adjacent sectors with difference in sectarian distribution where those participants would sign a 'code of honor' to stop killings and forced displacement.

For example, there are now talks and meetings between Sadr city, Azamiya and several other districts in north-eastern Baghdad similar to the so far more or less successful reconciliation that took place in other parts of central eastern Baghdad districts last week. This example of neighborhoods peace talks is echoing in Baghdad recently even that I heard yesterday that the clashes there were going on in Haifa street and adjacent streets were the result of residents from a Sunni district and a Shia one joining forces to confront a death squad disguised as police commandos.

RETURN OF THE KING
In another bit of good news, a prized statue of an ancient king that was stolen during widespread looting in Iraq following the U.S. invasion three years ago has been returned to the country's government.

Made of black stone, the statue is the oldest known representation of the king of ancient Iraq. It was excavated in the early 20th century near a temple in southern Iraq. Earlier this year, informants notified the Department of Homeland Security of the statue's whereabouts.