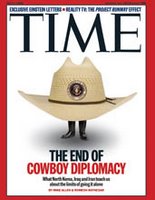 The ever reliable mainstream media has spotted a trend: The Bush administration is taking a new tack in foreign policy. Pre-emption is out and it is being more patient with its diplomatic partners and adversaries. This trend is noted in a Time magazine cover story entitled "The End of Cowboy Diplomacy" and a New York Times piece, among others.

There is only one problem with these pieces: They do not acknowledge that the shift is a result of the failure of a foreign policy predicated by unbridled power and undone by incompetence. There is nowhere left to go but up.

One consequence of the shift is that the administration seems to have effectively given up on democracy promotion in the Arab world. Notes Marc Lynch at Abu Aardvark:


On al-Arabiya last week, Hisham Milhem led a discussion on "Bush and democracy in the Arab world." . . . I was most struck by a remark by Amr Hamzawy. He pointed that the fact that most of the Arab media and political class were now discussing the "retreat" of American commitment to democracy demonstrates that at least at one point they were prepared to entertain the thought that there had been some credibility to that campaign. No longer, Hamzawy argued — America's turn away from democracy and reform had badly hurt its image and its credibility with this Arab political class. . . . This seemed to be a well-received notion.

I'll go this gang one better: The Bush administration has no foreign policy anymore.

Kevin Drum says it better than I can at Political Animal:

They have no serious plan for Iraq, no plan for Iran, no plan for North Korea, no plan for democracy promotion, no plan for anything. With the neocons on the outs, Condoleezza Rice at the State Department, and Dick Cheney continuing to drift into an alternate universe at the OVP, the Bush administration seems completely at sea. There's virtually no ideological coherency to their foreign policy that I can discern, and no credible followup on what little coherency is left.

As near as I can tell, George Bush has learned that "There's evil in the world and we're going to stand up to it" isn't really adequate as a foreign policy for a superpower but is unable to figure out anything better to replace it with. So he spins his wheels, waiting for 2009. Unfortunately, the rest of us are left spinning with him.

The apparent abandonment of democracy building is a mixed blessing. It was a worthy endeavor in principle, but the heavy-handed execution -- in Iraq at point of gun -- was its undoing.
Posted by Shaun Mullen at 4:43 AM
Email ThisBlogThis!Share to TwitterShare to FacebookShare to Pinterest