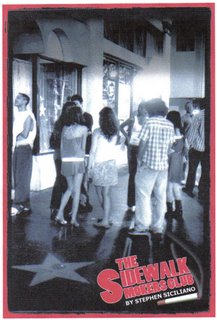 When folks ask what Kiko's House is all about, I explain that it's a current and cultural events blog. This usually sends me into paroxysms of guilt because I seldom post anything cultural beyond our monthly book club and compact disk picks. Oh, yes, there's also the Gratuitous Kitty Shot of the Week.

In a modest effort to begin righting this imbalance and offer a leg up to Stephen Siciliano, a fellow blogger, I'm going to pitch his new novel, "The Sidewalk Smokers Club."

Here's the back jacket blurb:

Stephen Siciliano's Sidewalk Smokers are driven outdoors by the most selective kind of lawmaking, resisting the increased regulation of American life, a cabal of rootless cosmopolitans on the make for the big break. The Smokers are united behind one of their own, taking on a media giant over the publishing of some dated, nude photos. Lethargic sensualists, craven in their drive for publicity, the group's saving grace is that they are uncommonly kind to one another. Do we really know people like this? Probably not, which may, in the end, be what Mr. Siciliano is after.

Click here to read the first chapter and order a copy for your very own self.

Meanwhile, here's an excerpt to whet your appetite. It involves Randall, one of The Club's members, who takes advantage of his new found celebrity and attends a party at an A-list actress' home:

He felt a little nervous and was forced to take a deep breath before sauntering up the walkway with the tin of expensive (for him) cigars under his arm.
Randall rang the bell and was half-surprised to see the A-list actress open the door all on her lonesome. Stripped of so much stage setting she could have been any other of the ravishing muses in the world. Out a corner of his eye – the rest of it being occupied with her – he caught a glimpse of at least three A-list actors and actresses whom were daily fare on the covers of magazines in supermarkets across the land. He opted for a cool play and stumbled a little on the intricate Persian rug that covered the floor of A-girl’s anteroom. The stars didn’t mind; they were used to that kind of thing. They’d read the accounts and viewed the telereports of the benefit/press conference for Yvonne.
They were totally behind her in the battle against an exploitative media megamonster because, rich as they were, it was to a large degree their fight, too.
He dumped the specially purchased and overpriced cigars on his hostess who then escorted him up to a pair of well-known buddy actors and introduced him thusly:

“Here’s the leader of The Sidewalk Smokers Club!” The two handsome, thin, utterly charismatic young blades smiled kindly and gave manly pats on the shoulders. She smoothed over her departure with a primer on where the booze and food might be found and then shimmied away leaving a bit of heaven lingering behind.
Randall struck the egalitarian note by pointing out that he was not, in fact, the leader of The Sidewalk Smokers Club, a non-hierarchical organization in which the creative impulses of its ever-changing ranks were never oppressed by someone’s weightier status. Randall had forgotten that those in whose company he now found himself were very dependent upon repeated recognition of their weightier status, but unwittingly recovered when he said, “As bum philosophy holds, he who leads sometimes dies first.”
Bum philosophy did not, up until that moment, hold any such thing, but it would thereafter, for the system was an elastic one that shrank and grew with the necessities of its creators.
And besides, he was playing a role. He was invited as a bum philosopher and by gosh he’d better bum philosophize if he wanted a return trip to this little Eden.
It took him a few minutes to get his bearings. After all, it could have been a dream.
Everybody present was young and famous and it rather rattled him to think such people actually hung out together, unbeknownst to him. The guys, with a few colorful exceptions, were good-looking and practiced in the small gestures of the feigned or real boredom that say C.O.O.L. None were quite as original as Randall, just excellent in meeting a pre-established and (almost) universal standard of manhood. The girls were of course beautiful, some less so than on screen and others beyond compare in person. They were not guarded, for they were among their own guild of the gilded and Randall almost fooled himself into thinking their openness had to do with his good looks or beastly magnetism.
He felt a bit the dancing bear. But in the end there was empathy and admiration, for what were any of them but dancing bears of one sort or another?
His hostess, the A-list actress – had invited him in that moment when her social antennae informed that the event at Joya’s was a dirty, nasty, funky hit and the people who had pulled it off were comers. Everyone there wanted to know about Randall’s friends, about the sexy girl who had showed up in the magazine and was stealing all their air time with her gutsy story of taking on the same concentrated media companies in whose hands their bank accounts resided.
In short, The Sidewalk Smokers Club was doing the dirty work everyone present fantasized over, but were too compromised by personal pleasures and possession to act on. Having been summonsed to the head of the class like good little students, each fearfully awaited the day of summary dismissal.
Anyhow it didn’t matter. Not at the moment. The party was raucous. Fabulous stringy, sandy-haired, honey-voiced, loosey-goosey girls grabbed him by the hand and took him from magic room to magic room where it is best to let mystery sprinkle its own insinuations rather than deflate the imagination with demystifying, clinical detail.
One or two of them suggested he stop smoking, but Randall was a delegate from the other world, carrying a banner, and these were the people whom he wanted under that banner. They didn’t know this. They did. They cared. They didn’t. They were taken aback and admiring of the fact he would deign to tell sirens such as they “no” (much as it killed him).
He maxim-ized in his mind: “Saying no to a beautiful woman will get you either nowhere or everywhere,” and promised to do his best to remember it “morning next” as the British refer to the morrow.
R. was having a blast, flirting with drunken effusiveness, but in the end too keen of purpose to blow it with giddiness. And besides, things turned out to be rather natural.
One star turned out to be a delicate guitarist, accompanied by the surprisingly heartfelt vocal stylings of what Randall had thought was a rather meretricious comedian. A sit-com silly-girl danced like a crystal nymph with another feature-length actress of higher status, and he was stunned to learn that they were not fakes.
No, these people were special, finely honed instruments. Their having been reduced to commodities for sale was but the ransom for a life of riches. They were worth more, it seemed to him, than the sum total of things they were known for. They were deeper than their tabloid dimensions. So, mindful of their reduction and massification, and given his long past of disdainful rebellion against such things, why did Randall want to be involved?
Because he did.
Rebellion, he’d decided, was stupid if nobody knew who you were or why you were doing it. The only revolution worth its salt was that acted out upon the stage of conformity. Doomed to failure, it at least provided those with free-spirited temperaments a distinctive role in the battle for success.
The actor Hat Midone, who’d been subjected to this particular discourse, agreed wholeheartedly. Randall gave Hat his card. Hat gave Randall his publicist’s.
R. chose a moment just after the party had peaked – when the A-list actress had opened a pantry revealing case after case of a quality tequila – to depart and, with his head held high lest everyone who was anyone be watching, rejected all pleas and temptations that he stay.
Heading out, the hostess caught up and intimated that this was not the last of it, that there would be more. He kissed her goodbye and coughed roughly enough for those in proximity to notice. Nonchalantly sweeping the room before exiting (stage left as it were) Randall saw that all the cigars he’d brought had been put to use.
Sometimes the world comes around to us.

Posted by Shaun Mullen at 4:16 AM
Email ThisBlogThis!Share to TwitterShare to FacebookShare to Pinterest