Iraq I: Mahmudiyah Is Not Just Another Scandal 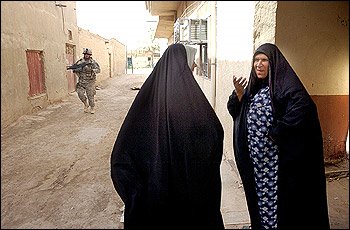 A soldier patrols a side street in Mahmudiyah
A regrettable but inevitable byproduct of war is stressed out soldiers killing civilians whom they mistake for the enemy or overreacting in response to the deaths of fellow troopers. That may be what happened in Haditha last November when Marines rounded up and shot 24 unarmed Iraqis at point blank range after their convoy was hit by a roadside bomb, killing a 20-year-old lance corporal.

What occurred near Mahmudiyah on March 12 is entirely different. It is a story of barbarity and mastery of the powerful over the weak, in this case a young woman by the name of Abir whose beauty was her undoing.

If you have a weak stomach, stop right here because I'm going to get graphic. But if you want to understand why what happened near Mahmudiyah is not just another scandal in a war with far too many of them, please read on.

When soldiers from the 502nd Infantry Regiment of the 4th Infantry Division disguised in Iraqi garb appeared at the isolated farmhouse of Qasim Hamzah Rashid al-Janabi, they were not entirely unexpected.

Abir had told her mother, Fakhriyah, that soldiers at a checkpoint that she had to pass through going to and from school were being sexually aggressive toward her and she feared for her safety. She was being kept out of school as a result.

Among the soldiers entering the home was Steven Green, a 21-year-old boy-man who had been in the Army for only 11 months but already showed a pattern of disturbing behavior.

Green then turned on Abir -- whom Iraqis say was 15 and U.S. officials say was 20. Her white dressing gown and bra were torn from her body and her legs tied. Green and as many as four other soldiers then took turns raping her. By the time they had finished using her body, blood was flowing from between her legs. Green then shot Abir in the head or hit her with a sharp instrument and smothered her with a cushion, depending upon the account, and set the family's bodies afire in a cover-up effort.

U.S. soldiers told neighbors that the family had been killed by Sunni terrorists because they were Shiites, but the claim was widely disbelieved. Neighbors and religious leaders in the area kept quiet about the rape-murders because of sensitivities in Arab society about reporting sex crimes, but the incident prompted retaliatory attacks on American troops.

Higher-ups apparently were unaware of the incident when Green was diagnosed with an "anti-social personality order," given an honorary discharge and sent home to Midland, Texas two months later. He was charged with the rape-murders last week.

Four other members of his unit were charged with participating in the crimes over the weekend and a fifth who manned a radio at a nearby checkpoint was charged with dereliction of duty for failing to report the crimes.

* * * * *
The rape-murders raise questions of no small consequence:

* There is confusion over what happened to Abir's body.

Some people say it was taken to a U.S. military base; some media reports say the Army has been working with relatives to have it exhumed.

Autopsying the body is, of course, of great importance since DNA in the semen left by her rapists would identify them if it was not cooked off when her body was burned.

The matter is complicated by Islamic tradition, which has strict rules governing exhumation, which is considered desecrating the remains. Religious leaders would have to give their permission before there could be an exhumation and autopsy.

* Green obviously was displaying aberrant behavior if he was diagnosed with an anti-social personality disorder.

This disorder is defined as:

Chronic behavior that manipulates, exploits or violates the rights of others. People with the disorder may break the law repeatedly, lie, get in fights and show a lack of remorse.

Was this behavior enough to confine him to barracks? Apparently not. Should it have been enough? I don't know.

* Is it appropriate for an Army having a hard time filling its lower ranks to accept recruits with personality disorders and send them into combat?

You didn't ask, but that was only a bit higher than the less than 1 percent discharged for personality disorders during the 2001 fiscal year before the war in Iraq began. Surprised? I was.

* The rape-murders were being talked about within Green's immediate unit, and probably at the platoon level if not the company or battalion level, if not even higher.

But why the crimes did not come to light until one of the soldiers who had been present at the Al-Janabi home with Green mentioned it during a psychotherapy session?

The psychiatrist apparently (and, I believe, correctly) thought that being told of a rape-murder trumped his patient's right to confidentiality and reported the information to a commander.

* Why will Green be tried in a civilian court although he committed the crimes while in the military?

Because the U.S. Supreme Court established over 50 years ago that jurisdiction of the military courts martial system applies only to those on active duty. There is a rarely invoked exception: The military can return a retired service member to active duty for the purpose of facing charges in a military court.

Green was technically separated, but not retired, from the military when the charges against him were filed, but that still puts him beyond the reach of a military court unless higher ups intervene.

That will not happen.

Green has entered a not-guilty plea through a public defender in a U.S. District Court in Louisville, which is near Fort Campbell, Kentucky, where his unit is stationed when it is stateside. He is scheduled to be arraigned on August 8. (Go here to read the criminal complaint.)

The five other soldiers who have been charged face courts martial.

* Is this an instance where the immunity routinely given U.S. troops for crimes against the civilian population should be waived?

Mindful of not biting the hand that feeds him, Iraqi Prime Minister Nouri al-Maliki is waffling, but has called for an independent Iraqi inquiry into the rape-murders. He also says he believes that the immunity provision has emboldened international forces to commit crimes.

Historically, the U.S. has been extremely protective of servicemen stationed overseas, but the principle of protecting them against prosecution in local courts has been sorely tested in Japan -- and specifically Okinawa -- as public sentiment against the presence of U.S. forces has intensified.

The U.S. actually allowed two of its servicemen to be prosecuted for rape under Japanese law.

* Are U.S. soldiers accused of serious crimes against civilians likely to be turned over to Iraqi officials in the future?

No way, Jose. You probably forgot that there are two wars being fought: The war in hundreds of cities and towns like Mahmudiyah and the public relations war at home.

The Bush administration has gone to great lengths to mouth platitudes about making sacrifices for the war while sanitizing its true impact. Other than the troops and their families and friends, no one is making any sacrifice in the U.S. Except losing their civil liberties.

Recognizing the barbarity of Green's deeds is one thing, and we can again thank a much vilified mainstream news media -- as well as blogs like Kiko's House -- for getting the story out and putting heat on the brass. But turning this young man over to the Iraqi criminal justice system -- such as it is and based on Islamic law as it is -- would provoke howls of outrage from Plymouth to Peoria to Petaluma.

* Were the much publicized beheadings last month of two other 502nd Infantry Regiment troopers in retaliation for the rape-murders?

There is solid evidence that the Mamudiyah crimes are directly linked to the deaths of Kristian Menchaca and Thomas L. Tucker, privates first class who were kidnapped by insurgents, tortured and beheaded and their booby trapped bodies left near Yossifiyah.

Yossifiyah is one of the three points of the so-called Sunni Triangle of Death. One of the other points is Mahmudiyah.

Military officials had initially believed that Menchaca and Tucker were targeted because they were in a vulnerable position, but kidnappings of U.S. troops is extremely rare.

The member of Green's unit who revealed the rape-murders during a psychotherapy session apparently did so because he was shaken by the attack on Menchaca and Tucker.

The apparent complexity and brutality of the attack has the earmarks of being a message to Americans that the rape of Iraqi women would not be tolerated. It may also be no accident that the kidnappings occurred three days after President Bush's June 13 fly-by visit to Baghdad to meet with Prime Minister Al-Maliki, which certainly angered insurgents.

There also are reports that insurgents have vowed to kidnap and kill another eight American troops to exact a 10-to-one revenge, which apparently is mujahideen custom, for Abir's rape and murder.

* Finally, was Green's case handled by the book or were exceptions made?

It certainly took much too long for commanders to learn of the crimes, and a shrink as tipster is not exactly the stuff of an everyday whodunit.

But from all that I have read and heard, and that is an awful lot, the cover-up conspiracy theories floating around the blogosphere and elsewhere don't wash. It does not appear to me that rules were bent or broken in the case of this particularly disturbed young man.

However, Dear Reader, that is beside the point:

The questions that the Mahmudiyah rape-murders raise are more difficult to answer because of the war itself -- a misguided mission to topple a dictator that has deeply alienated the very people the Bush administration haughtily thought would embrace America as its liberator.

Any rape is heinous, but the rape of Abir al-Janabi is particularly so because she lived in an Islamic society.

Military commanders have apologized to the people of Mahmudiyah. President Bush has promised "absolute justice" if Green is found guilty.

But the president's words ring hollow, as they usually do.

George Bush already had much blood on his hands. To that you can add the blood from the torn vagina of a young woman who wanted nothing more than to get through another day amidst the death and destruction that is being visited on her country because of the hubris of a man thousands of miles away who is drunk with power and incapable of exercising it properly.

Posted by Shaun Mullen at 2:51 AM
Email ThisBlogThis!Share to TwitterShare to FacebookShare to Pinterest