Israel: A Tale of Three Davids 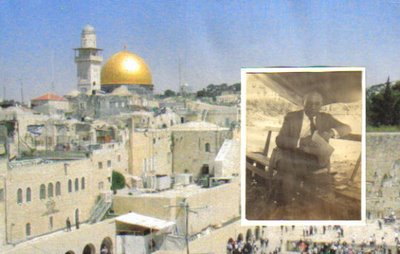 In many respects, I am a mirror image of David No. 1 -- my grandfather, David Snellenberg.

Like me, he was as bald as a billiard ball, enjoyed an occasional cigar, questioned authority, enjoyed baseball, had a deep love of America and was a student of its history. He introduced David No. 2 as a young boy to journalism and as a result every one of the thousands of my bylines in newspapers from Philadelphia to San Francisco to Tokyo during a long career included my middle initial -- "D" as in David -- in his honor.

He and I had something else in common: A deep ambivalence about David No. 3 -- that would be the Star of David, or the nation of Israel.

When the scale of the humanitarian crisis involving German Jews became known in the run-up to World War II, he led an effort to raise relief funds from the local Jewish, Protestant and Episcopalian communities and shook down some wealthy industrialist friends for donations, as well.

He helped make arrangements to bring a Jewish teenager to the U.S. whose parents became victims of Hitler's Holocaust. The lad went on to graduate at the top of his class and became a renowned medical doctor (and coincidentally is alluded to in another Kiko's House post today.)

But Granddaddy Snellenberg believed that Jews were citizens of the world who did not need their own state. I share that view.

He also anticipated that the creation of Israel would result in bloodshed and grief, although he went to his reward before the vicious cycle of wars began that continue to this day.

I am not suggesting that the current war between Israel and Hezbollah would not have occurred if Israel did not exist. That's silly, and my ambivalence notwithstanding, I would give my life to defend Israel.

But I believe that the scale of Israel's response is out of proportion, smacks of collective punishment and ultimately will be counterproductive. Just what was accomplished by blowing Beirut's airport to smithereens? Or taking out four peacekeepers in a coordinated artillery and air strike on a United Nations outpost in southern Lebanon?

And poor Ariel Sharon drifts ever closer to meeting his Maker.

I also believe that the current conflict has been widely mischaracterized as merely another round in the endless back-and-forth between Israel and its enemies. It's not.

It is nothing less than a new chapter in the War on Terror. This can be seen in the muted response to Israel's actions by a surprising number of Arab governments that seem to understand that.

I am sure that Granddaddy Snellenberg would have agreed.

'AMERICA IS ALONE IN THIS"


Marc Lynch, who has been watching lots of Arab TV, has this to say at Abu Ardvark:

America is totally alone on this. And more than most Americans might realize, America is being blamed for Israel's actions. The shift in Arab public discourse over the last week has been palpable. For the first few days, [there was a] split between the Saudi media and the "al-Jazeera public" . . . Then for a few days, horror at the humanitarian situation, fury with the Arab states for their impotence, speculation about the endgame, and full-throated condemnation of Israeli aggression. But for the last few days, the main trend has been unmistakable: an increasing focus on the United States as the villain of the piece. (That the Israeli bombing of Beirut stopped just long enough for Condoleezza Rice's photo op certainly didn't help.)

Meanwhile, check out Ductape Fatwa's musings at My Left Wing. An excerpt:

Any US politician, regardless of party affliliation, regardless of whether he is considered by his devotees to be "left" or "right," "conservative," or "liberal," who dares to express any view other than unconditional support for Israel has effectively announced a career change.

It was with interest that I listened last night to a FoxNews commentator describing with a breathless awe and undisguised admiration and glee, a weapon designed to "clear the area of all living things" that had been provided to Israel by the US, now currently being deployed against the people (and animals, and plants) of Lebanon.

How did human beings get to this low point in our history?

Posted by Shaun Mullen at 6:04 AM
Email ThisBlogThis!Share to TwitterShare to FacebookShare to Pinterest