Iraq I: The War Is Turning Us Into Cowards 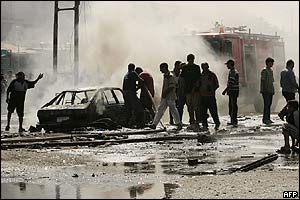 Americans Invited: Another Baghdad weenie roast
On Tuesday, President Bush and Prime Minister Al-Maliki announced a major new security sweep of Baghdad that will accomplish nothing except kill even more Americans and Iraqis.

This strategy is not a carefully thought out initiative but rather a hastily thrown together reaction to the mounting carnage in Baghdad.

Yes, once again the Bush administration hopes for the best but won't plan for the worst.

No amount of troops will be able to pacify the vast stretches of the capital that are controlled by militias backed by the local police forces.

Worst yet, U.S. troops will have to engage in door-to-door combat with an enemy who not only knows the battlefield well but has support of the locals. Such close-quarters fighting has been a disaster from Saigon to Mogadishu to Kosovo to Baghdad itself, most recently during an abortive security sweep in June that made the situation worse and prompted the new strategy.

What is even more upsetting than this wrong-headed move is the muted coverage of -- and absence of debate over -- the new strategy in the mainstream media and blogosphere.

I had initially written this off to three factors:

* Fatigue over the intractability of the war.

* A shift of focus to the Israel-Hezbollah conflict despite the fact that many more Iraqis have died in the last two weeks than in that series of battles.

* It's summer, and at least figuratively speaking, everyone's at the beach.

But as I gave this more thought, I zeroed in on a fourth reason:

With the full encouragement of the Bush administration, the U.S. has become a nation of cowards.

On the one hand, the White House has done a fairly effective job of tamping down criticism of the war, while the MSM has compliantly sanitized it by filtering out almost all images of its ravages when Americans are involved.

On the other hand, the White House has done a superbly effective job of asking Americans to make sacrifices because of the war while in reality requiring none whatsoever.

Except for those ubiquitous "Support Our Troops" bumper stickers, there is no sign that the U.S. is in a time of great national testing. There is no belt tightening, no tax increases, no rationing, no other forms of deprivation.