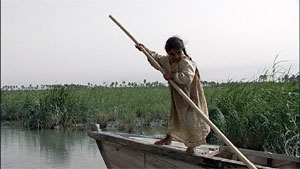 The near absence of good news out of Iraq has included the toll first Saddam Hussein's brutal regime and then the U.S.-led war has taken on the nation's ecosystems.

That included the Mesopotamian marshes of southern Iraq, which once covered more than 5,800 square miles (15,000 square kilometers) — an area larger than the Florida Everglades.

The wetlands were so lush and full of life that some experts have speculated they inspired the biblical story of the Garden of Eden. But by 2000 the marshes were reduced to less than 10 percent of their previous size under a systematic plan by then Saddam to dam, dike, and drain them.

Efforts since Saddam's fall in 2003 to restore the region to its former condition are making progress.

* Local farmers began blowing up dikes and earthen dams to release water back into the marshes.

* Within a year of reflooding, species recovery began. Small invertebrates, fish, and bird species all began returning, though in much reduced numbers.

* Rare bird species like the marbled teal and the Basrah reed warbler, thought close to extinction, survived the wetlands' destruction.

* Within two years about 39 percent of the destroyed marshes had standing water, and vegetation was growing at a rate of 300 square miles (800 square kilometers) a year.

* Recent overflows of the Tigris and Euphrates rivers are probably responsible for replenishing the marshes with even more seeds, insect larvae, and fish stocks, encouraging more birds to return.

The Mesopotamian marshes lie within the Tigris-Euphrates river basin, which spans Iraq, Iran, Syria, and Turkey.

For years oil drilling, agriculture, and river damming had been steadily changing the character of the marshes, home to about 300,000 Marsh Arabs, or Ma'adan, and many species of wetland animals.

In 1991, Saddam's regime decided to counter Ma'adan participation in a southern uprising by wiping out their traditional homeland. Villages were burned, rebels were executed, and water was drained and diverted from lands once teeming with life.

When Saddam was toppled, most of the 75,000 refugees who fled the marshes returned to live near them, but the condition of the marshes made it nearly impossible for the Ma'adan to resume a life dependent on fishing and raising water buffalo.

It has been a harsh life for these people. When you go there, you quickly see that these people are extremely poor, isolated, without electricity, without education, and without access to medical care. They're living the way they've lived for thousands of years.

Not all the news is so promising. Reflooded soils are releasing toxins, such as hydrogen sulfide, from military ordnance. Land mines are littered throughout the marshes.

Vast areas of the marshes cannot be sustained as humans move back in unless new agricultural methods are adopted. Water usage is going up and there will be shortages, especially in drought years.
Posted by Shaun Mullen at 5:55 AM
Email ThisBlogThis!Share to TwitterShare to FacebookShare to Pinterest