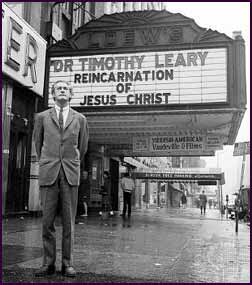 Timothy Leary: 1966
Will the July meeting of the Kiko’s House Book Club come to order. Thank you.

We have for your perusing pleasure today five books recommended by visitors to Kiko’s House and Yours Truly, three of them coincidentally focusing on events in the 1960s, although from different perspectives. The books marked with an asterisk (*) means they are available in paperback.

"American Pastoral" was recently named one of the best American novels of the last 25 years in a New York Times survey of writers and other literary types.

It's hard to argue with that assessment after reading this beautifully written exposition on the turbulent 1960s written in the voice of Nathan Zuckerman, Roth's literary alter ego. Zuckerman acquaints us with Seymour "The Swede" Levov, who sees the America he loves grow crazier and crzier, culminating in his daughter Merry protesting against the Vietnam War.

This is the second book in as many Book Club meetings by this American woman of letters and a timely choice with mid-term elections approaching in the U.S. of A.

While Didion brings a novelist's touch to the eight essays on American politics circa 2000 that make up this fine little book, the quackery of the system that gave us George Bush the Younger is not fiction but fact. She is especially scathing in discussing the incestuous relationship between the news media and political establishment.

The Pursuit of Victory: The Life and Achievement of Horatio Nelson
By Roger Knight (Basic Books, 2005)

There have been hundreds of biographies written about Horatio Nelson, the great British naval hero who smashed Napoleon's fleet in the 1798 Battle of the Nile and lost his life at Trafalgar in 1805, but most have been based on secondary sources.

Not so with this meticulously researched tome. Author Knight went back and examined primary source material and the result is a sprawling book that debunks many Nelson myths while embellishing his reputation as a born leader who inspired fierce loyalty from his crews.

Tim O'Brien, who was a combat infantryman in Vietnam, is the preeminent writer of fiction from that war and this book, along with his "Waiting For Caciato" and "If I Die in a Combat Zone" make up an extraordinary triad.

If it weren't for the subtitle, you'd think that "They Things They Carried" was a memoir, albeit a somewhat hallucinatory one because of the blurring between reality and fantasy. But then that's what Vietnam was all about. (For a taste of O'Brien's writing, click here for an excerpt from the book.)

Greenfield, who wrote terrific biographies of Jerry Garcia and Bill Graham, has hit a grand slam in this scathing account of Timothy Leary, the 1960's counterculture hero and LSD guru.

He contrasts the public Leary with the private Leary, a profoundly selfish and narcissistic man who preached inner growth to his disciples but was unable to liberate himself from his own demons in a wild ride of a life that included lecturing at Harvard, hanging out with Allen Ginsberg and Abbie Hoffman to escaping from a California penitentiary escapee and sucking up to Black Panther Eldridge Cleaver in Algeria.

The Year of Imaginary Thinking by Hoan Didion (Random House, 2005)
Posted by Shaun Mullen at 4:34 AM
Email ThisBlogThis!Share to TwitterShare to FacebookShare to Pinterest