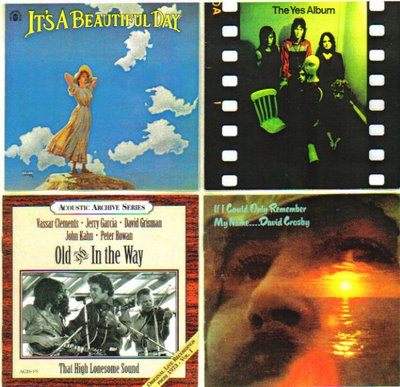 What do these four albums have in common? Read on to find out.
We're going to change our format a bit this month and feature a total of nine albums, some of them rather obscure, from the mid-1960's to the mid-1970's. They run the gamut from bluegrass to folk rock to fusion, but there is a fair amount of multi-genre cross fertilization among them.

I'm pretty sure that all of the albums are still in print -- a testament to their excellence. Some are available on the cheap, albeit in used condition, from the usual online retail suspects.

Meanwhile, drop us a line at kikokimba@gmail.com and let us know what you're listening to, especially new stuff that might have escaped our middle-aged ears.

(1966) Harmonica virtuoso Paul Butterfield was already an established blues master when this genre-bending album was released, and it became an instant hit among the growing number of musicians getting into psychedelic music. That's because of the 13-minute title track co-written by Butterfield and a young guitarist by the name of Mike Bloomfield. The Indian raga-influenced jam was oft copied by other bands, but "East West" remains the lodestone.

(1974) Tom Waits' masterfully written songs are oft covered, including by The Eagles ("Ol' 55") and Bruce Springsteen ("Jersey Girl"). But Waits' beat-poet singing style early in his career was an acquired taste and he has remained something of a cult figure despite loosening up stylistically in later years. This, Waits' second album, remains a favorite because of the wonderful turns of phrase in many of the songs, including "New Coat of Paint," "Diamonds on My Windshield" and most especially the title track.


IF I COULD ONLY REMEMBER MY NAME (David Crosby)

(1971) This obscure gem -- 's first solo album -- has been in and out of print over the last three decades, mostly the latter, and that's a darned shame. It followed CSN&Y's "Deja Vu" and includes a Who's Who of San Francisco musicians of the era, including Jerry Garcia, Phil Lesh, Bill Kreutzmann and Mickey Hart from the Grateful Dead, Grace Slick, Paul Kanter, Jack Casady and Jorma Kaukonen from the Jefferson Airplane, Michael Shrieve and Gregg Rolie from Santana, and David Frieberg from Quicksilver Messenger Service. Neil Young and Joni Mitchell also make cameo appearances. The extended "Cowboy Movie" is worth the price of admission, although there's not a bad cut on the album despite the fact it was recorded in a series of single takes, warts and all. (FYI, Crosby fronted a quartet with Garcia, Lesh and Hart that did a small handful of live performances. Bootlegs of the shows are to die for.)

(1971) I will never forget the sensation of levitating out of my seat as Mahavishnu Orchestra hit the first note in its first appearance (opening for Weather Report) at the a year or so after "Inner Mounting Flame" was released. The melding of jazz and rock during the 1970's was shaky at best, and there was an extraordinary amount of bad music made under the “fusion” label. But this album -- with the additional influence of the Indian music that English guitarist John McLaughlin brought to the mix -- remains a masterpiece. "The Noonward Race" is extraordinary, especially if played really loud.


IT'S A BEAUTIFUL DAY

(1969) No disrespect meant, but It’s a Beautiful Day remained in the shadows of the psychedelic big three – the Grateful Dead, Jefferson Airplane and Quicksilver Messenger Service -- because it never really found its groove. I blame leader David LaFlamme, a former symphonic violinist, who tried to make the band so many things that it was never particularly great at any of them. Unlike its brethren, It’s a Beautiful Day was never a psychedelic band as is obvious by “White Bird,” the band’s only hit and the album’s best cut. It's is a great example of the sometimes stunning vocal stylings of LaFlamme and his wife, Linda.

(1969) "Unhalfbricking” and “Liege & Lief” are the best albums by this wonderful British folk-rock band, and I never let a Halloween go by without playing the later, which includes the seasonal “Tam Lin” and “.” On this album (hell, all of their albums) Fairport weaves the most wonderful musical textures with the late Sandy Denny’s superb lead vocals and the stylings of guitar master Richard Thompson and fiddler David Swarbrick. My favorite cut is the joyous “Come all Ye,” which some critics have compared to the music of the Band. I don’t disagree, but there was only one Fairport.

(1968) There was a Present at the Creation feel about the original “Super Session” album, an LP with five drop dead great studio cuts by blues guitarist Mike Bloomfield, keyboardist Al Kooper (who had just left Blood Sweat and Tears) and bassist Harvey Brooks on one side and four live recordings (with the absence of Bloomfield and addition of Stephen Stills, late of Buffalo Springfield, on guitar) on the other side. was at his creative peak, which is a damned shame since he was only 25 and on his way to becoming yet another victim of heroin. In fact, he disappeared after the five studio tracks were recorded and producer Kooper had to fill out the album with the live stuff. Subsequent CD releases include bonus tracks from the live recordings, but the studio cuts remain the best.


THAT HIGH LONESOME SOUND (Old and In the Way)

(1973) Many latter day Dead Heads probably are unaware that Jerry Garcia was a more than respectable banjo player who for a brief period in the early 1970’s teamed with some of the best in bluegrass, including fiddler Vassar Clements and mandolin player David Grisman. Rounding out Old and In the Way were guitarist Peter Rowan, no slouch himself, and the unremarkable acoustic bassist John Kahn. I saw the band several times, including at the legendary near , and this live album captures its infectious enthusiasm – and sometimes off-key vocals. "Uncle Pen” and “Lonesome L.A. Cowboy” are favorites.
THE YES ALBUM (Yes)

(1971) This would seem to be the odd album in the group, but the complex music of the British progressive rock band Yes complimented the extended compositions being played by some of their American counterparts of the era, including the Dead and Quicksilver.I’ll take Jerry Garcia and the Dead over Steve Howe and Yes almost any day of the week, but “Yours Is No Disgrace,” “Starship Trooper” and “I've Seen All Good People” are all great songs in their own right and “The Yes Album” is perhaps the seminal prog rock recording.