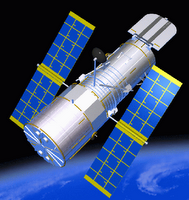 NASA has switched to backup power for the main camera on the Hubble Space Telescope and has restarted the balky device, which will resume taking photographs on Sunday night.

Ground controllers received indications June 19 that voltage readings on the power supply for the Advanced Camera for Surveys were outside of their acceptable range, causing the instrument to shut down. Other instruments on the orbiting telescope have continued to operate.

If the power switch works, the camera could resume its observations Sunday night.

The ACS camera, installed by a space shuttle crew in March 2002, increased Hubble's vision 10 times and has given the clearest pictures yet of galaxies forming in the very early universe.

The instrument consists of three electronic cameras, filters and dispersers that detect light from the ultraviolet to the near infrared.

The power supply problem affected two of the three detectors.

If the switchover doesn't work, engineers would begin looking at each of the three detectors individually to try to isolate the problem.

Might be comparable to something like on your laptop computer, you have an adapter you plug into the wall and it provides the correct voltage to your power charger on your lap top. It's something like that power adapter.

The instrument was developed jointly by Goddard, Johns Hopkins University, Ball Aerospace in Boulder, Colorado, and the Baltimore-based Space Telescope Science Institute, which coordinates use of the orbiting observatory.

Posted by Shaun Mullen at 3:54 AM
Email ThisBlogThis!Share to TwitterShare to FacebookShare to Pinterest