Iraq I: What Is a Human Life Worth? 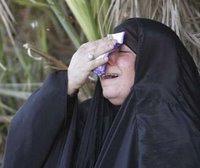 The concept of what a human life is worth is being tossed around like bean bag in the war in . In fairness, it is a profoundly difficult question, but one that necessarily has to be answered because of civilian deaths caused by the actions of troops.

There are incidents like that at Haditha last November when Marines rounded up and shot 24 unarmed Iraqis at point blank range after their convoy was hit by a roadside bomb, killing a 20-year-old lance corporal. Or the rape of a young Iraqi girl and the murders of her and most of her family near Mahmudiyah on March 12.

But more typical -- and no less regretable -- was an incident on May 30 in where soldiers manning a checkpoint opened fire on a speeding vehicle that either did not see or failed to heed their command to stop. It turned out that a man was driving his sister, Nahiba Husayif Jassim, to a hospital to give birth. Brother, sister and baby were killed, but in fairness it is difficult to blame the soldiers.

In each instance of an Iraqi civilian death, officials expressed regret (albeit belatedly so in the Hadith and Mahmudiyah incidents), then opened their checkbooks and wrote out so-called condolence payments of about $2,500 for each victim.

Contrast this with the typical $400,000 insurance payout for widow of a soldier who dies in the line of duty and the question of what a life is worth comes into sharper focus.

Is an Iraqi life really worth only a small fraction of what an American life is worth -- or barely one half of 1 percent in the case of these wildly contrasting post-death payouts?

Of course it isn't.

Andrew J. Bacevic, for one, believes that this disparity needs to be addressed. Bacevish, a professor, grad and vet, writes in the Dallas Morning News that:

For all the talk of being a sovereign nation, foreign occupiers are the ones deciding what an Iraqi life is worth. And although President Bush has remarked in a different context that "every human life is a precious gift of matchless value," our actions in continue to convey the impression that civilian lives aren't worth all that much.

That impression needs to change. To start, the Pentagon must get over its aversion to counting all bodies. It needs to measure in painstaking detail – and publicly – the mayhem we are causing as a byproduct of what we call liberation.

To do otherwise, to shrug off the death of Nahiba Husayif Jassim as just one of those things that happens in war, only reinforces the impression that Americans view Iraqis as less than fully human. Unless we demonstrate by our actions that we value their lives as much as the lives of our troops, our failure is certain.


The concept of assigning a price to a human life has been long embedded in American law, then along came the 9/11 attacks and an unprecedented government fund to compensate the families of the victims.

The intentions of the proponents of the fund were altruistic in the abstract, but it should not be forgotten that they grew out of an effort to cap the liability of and severely limit the families’ right to sue the airlines, airport owners, aircraft manufacturers, owners of the and city of .

The job of playing god -- ascertaining what each of the lives of the 3,200-plus 9/11 victims was worth -- fell to Kenneth Feinberg, an experience attorney and mediator in the landmark lawsuit between Vietnam vets and the makers of Agent Orange.

The story of how Feinberg crafted financial awards for a disparate group ranging from immigrant restaurant workers to police officers and firefighters to millionaire stock brokers is told in his “What Is Life Worth? The Unprecedented Effort to Compensate the Victims of 9/11.”

This small but powerful book is a must read for anyone with an inclination to play god or curious as to how this humble and scrupulously fair man dealt with grieving families who needed to be heard as much as they needed to be paid.

But we have to stay until we find the WMDs. maybe george will find them in Iran. Oh how i weep for America.