War on Terror I: The Same Old New Rules? 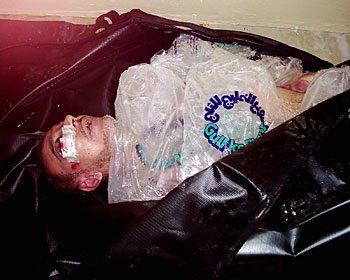 CIA torture victim
In the first indication that President Bush will abide by a U.S. Supreme Court ruling that eviscerated his administration's extralegal tactics in the War on Terror, the Pentagon has announced that detainees at Guantánamo Bay will be treated in compliance with the Geneva Conventions.

Whoa There, Nellie! I can't believe I'm writing those words.

Can it really be that a power grabbing, secrecy obsessed administration dead set against abiding by international treaties, the rule of law and the separation of powers between the executive, legislative and judicial branches, is doing a 180-degree turn?

Nah. They're just biding time in the hopes that Congress will vote to restore the old rules, those pesky European allies will lay off and court challenges from civil liberties groups will be turned aside.

In the wake of the 9/11 attacks, Bush had asserted that terror suspects were “illegal combatants’’ and not entitled to the protections of the conventions, which set forth rules for the treatment of prisoners of war. In other words, people nabbed in connected with the War on Terror did not have to be treated humanely. The reason: Because the president is the president and he can do anything he wants.

Military lawyers had warned that the administration's intention to not treat suspects as POWs and try them before military tribunals breached the conventions and other international standards, therefore putting U.S. soldiers captured by an enemy at greater risk.

The Supreme Court ruled by a 5-3 majority in Hamdan v. Rumsfeld that the administration had exceeded its authority by creating a system of tribunals without the approval of Congress and that terror suspects fell under Common Article 3 of the convention.

John D. Hutson, a retired rear admiral who was Navy's the top uniformed lawyer until 2000, is one of a number of retired senior military lawyers who have filed briefs challenging the administration. Said Hutson:

We’re at a crossroads now. We can finally get on the right side of the law and have a system that will pass Supreme Court and international scrutiny.

. . . They can't try to write us out of this, because that means every two-bit dictator could do the same. [It was] unbecoming for America to have people say, "We're going to try to work our way around this because we find it to be inconvenient." If you don’t apply it when it's inconvenient, it's not a rule of law.

Hutson's successor, Donald J. Guter, also has said it would be a mistake for Congress to try to undo the Supreme Court ruling:

This was the concern all along of the JAG’s [judge advocate generals]. It’s a matter of defending what we always thought was the rule of law and proper behavior for civilized nations.

BACK FROM THE DEAD
Congress rolled over and played dead in the aftermath of 9/11, allowing the president to run roughshod and giving his administration wide berth to impose its novel legal thinking at will.

But now, just in time for mid-term elections, lawmakers seem to have found their voice.

The Senate Judiciary Committee began hearings on Tuesday regarding whether there should be new legislation regarding Guantánamo detainees, and both Hutson and Guter will testify before it later in the week. The House and Senate Armed Services committees also will float their own proposals.

MEANWHILE . . .
About those pesky European allies: No fewer than six governments have demanded that Guantánamo be shuttered, while several are investigating the CIA's prisoner rendition and secret prison programs, citing violations of their sovereignty and international law.

About those civil liberties groups: The ACLU, which said it was taking a wait-and-see attitude in the wake of the Pentagon's Guantánamo announcement, is heading up a coalition of groups that have filed suit against the National Security Agency's domestic spying program. There also are other suits in federal courts challenging the rendition program and the state secret privilege that the administration has used to argue that all such lawsuits would damage national led to the Supreme Court decision.

THE BOTTOM LINE
Reaction to Hamdan has broken down along ideological and political lines.

The Righteous Right fears that terrorists have been given free rein. Cooler heads see the ruling as thwe catalyst for a necessary corrective.

While I'm with the cooler heads, I think the reality lies somewhere in between and that whatever transpires in Washington ultimately needs to take that into account.

I have two fears:

That Hamdan is a turning point in the application of war conventions and treaties and implicit in that is that soverign states playing by the rules are more vulnerable than the non-state (read terrorist) organizations that do not.

And that legislators who have frittered away the year pandering to their political base with stupid legislation, including constitutional amendments banning same sex marriages and flag burning, will end up handing the White House a blank check, which is exactly what got us into this mess in the first place.

THE TORTURE BUCK STOPS WITH . . .
Vice President Cheney and Defense Secretary Rumself, according to Larry Wilkerson, the outspoken chief of staff of former Secretary of State Powell, who interviews himself in a Nieman Watchdog article.

(Hat tip to Andrew Sullivan at The Daily Dish.)

WINGNUT ALERT
Rep. Peter Hoekstra, Republican chairman of the House Intelligence Committee, is red faced about a recently leaked letter that he wrote to President Bush written in May stating that he had learned of intelligence activities about which his committee has not been briefed and was concerned about whether the administration had violated the law.

Hoekstra now says that he he knows who the leaker was:

More frequently than what we would like, we find out that the intelligence community has been penetrated, not necessarily by Al Qaeda, but by other nations or organizations. I don't have any evidence. But from my perspective, when you have information that is leaked that is clearly helpful to our enemy, you cannot discount that possibility.

Hoekstra has no evidence, but it's gotta be those dad gum furrin' spies.
Posted by Shaun Mullen at 11:41 AM
Email ThisBlogThis!Share to TwitterShare to FacebookShare to Pinterest