Didja Hear the One About the Flaming Computer? 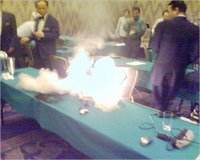 This photo of a Dell notebook computer bursting into flames, widely disseminated on the Internet in the last few days, has been a public relations nightmare for the world's largest computer maker.

And as far as I'm concerned, a well deserved comeuppance.

This post is being written on a Dell Inspiron 6000 notebook computer, one of two here at Kiko's House. It has yet to burst into flames, nor has it even smoked. I can thank goodness for that because it's had a heap of problems that have been exacerbated by what passes for customer service at Dell. Meanwhile, the other Inspiron 6000 has been problem free. Go figure.

Most of my problems were with Dell's offshore call center representatives who short of threats were unwilling to give me permission to send the computer back to Dell and endlessly came up with ways to avoid my being allowed to do so. They finally gave in after a six-week struggle. The computer went back. It got fixed. It's been okay ever since. (Knock on wood.)

Well, it turns out that I have plenty of company. Reports The New York Times:

The company said the (notebook on fire) incident got more publicity than such incidents usually do when they happen to other manufacturers. In part, that is because Dell's reputation for responsive customer service was already under attack after the company, the world's largest PC manufacturer, started to cut costs at its call centers last year. Dell, reacting to the savaging it has received on blogs and Web sites over the cuts, recently responded with a program to spend more than $100 million to improve service.

Posted by Shaun Mullen at 4:38 AM
Email ThisBlogThis!Share to TwitterShare to FacebookShare to Pinterest