Iraq II: Who is Steven Green? 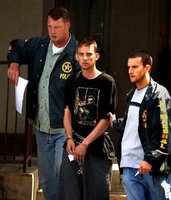 Steven Green appeared in federal court in Louisville, Kentucky last Thursday wearing baggy shorts and flip-flops and the same Johnny Cash t-shirt that he wore to a hearing earlier in the week in North Carolina after his arrested by FBI agents for the rape-murders.

He told the judge that his only worldly possession was a 1995 Lincoln Town Car.

Beyond that, Green's 21-year life is sketchy at best, although as someone who has edited and written many stories about the perpretator of the moment over a long newspaper career, I can state with certainty that he was not a choirboy whose inner demons suddenly and inexplicably were unleashed when he first spotted a beautiful young woman passing through his checkpoint on the way to and from school in Mahmoudiya, Iraq.

Green lived in Midland, Texas, long the home town of the Bush family. (Yes, that Bush family.) He had enlisted in the Army in June 2005. Before being sent to Iraq last September, he underwent basic and advanced training at Fort Benning, Georgia, where he was one of hundreds of soldiers who attended the weekly Church of Christ service at the base's chapel.

He's one of the countless guys coming through that are looking for something, searching for something to hang onto in his life. We're just there to encourage guys like him, help give him some hope.

Since learning of Green's arrest, Overby has contacted ministers near where he is being held in Kentucky:

We need to counsel this wrecked soul [while he awaits trial]. We just want him to be ministered to so he can just get a taste of some hope. Right now he has to be broken and guilt-ridden -- if he has any conscience at all.

The question of whether Green does have anything resembling a conscience is important since he was honorably discharged from the Army two months after the rape-murders after being diagnosed with an "anti-social personality disorder."

If found guilty, whether he has a conscience also will go a long way to determining whether his next stop is a padded room or a gallows.

Green was visiting relatives in Marion, North Carolina when he was arrested by FBI agents. A relative said that he was on his way to or from a funeral at Arlington National Cemetery for a member of his platoon who was killed in Iraq.

Green's father, John, said from his home in Midland that he was shocked by allegations against his son and referred all questions to lawyer Hal Brockett.

Brockett said he has been acquainted with John Green since they attended Lee High School in Midland, where young Green apparently dropped out after 10th grade. He later received his GED.

In January 2005, Green was arrested in Midland for being a minor in possession of alcohol, a misdemeanor. He served time in Midland County Central Detention Center and was released in early February. Greg Simolke, a nephew who saw Green before he went overseas, said:

When he was here for this visit, he seemed like the same old Steve. I don't understand what happens in a war, so I don't know how these things happen.

He had found direction in his life, something important and something that he really wanted to do. He was talking about making the military his career and was ready to go to Iraq. He thought it was a good thing to be serving his country.

The Army seemed to have bought into that notion. It featured Green in an Army News Service photo last December showing him about to shoot the lock off of the gate during a search of homes in an unidentified neighborhood.

The photo has since been removed from the news service's Website.

* * * * *
Background information for this and the previous post was taken from stories by The Associated Press, Charlotte Observer, Dallas Morning News, FindLaw, Fort Worth Star-Telegram, Houston Chronicle, KTEN-TV Texas, MyWestTexas.com, National Public Radio, The News Blog, San Jose Mercury News, The Telegraph UK and Washington Post.
Posted by Shaun Mullen at 2:50 AM
Email ThisBlogThis!Share to TwitterShare to FacebookShare to Pinterest

AS AN AMERICAN..GREEN MAKES ME ILL..I ONLY WISH TO SEE HIS FACE TO TELL HIM.U R A PIG.. I ONLY CAN PRAY THEY NEVER RELEASE THIS ANIMAL ON AMERICAN STEETS..HOW CAN A MAN SLEEP AT NIGHT KNOWING HE HAS DONE THIS..IS THIS WHAT WE CALL IRAQI FREEDOM...RAPING AND KILLING ENTIRE FAMILIES? IF SOMEONE DID THIS TO MY FAMILY..I WOULD BE AN INSURGENT..O YEAH WHAT AMERICAN WOULDNT BE? DOES THIS ANIMAL HAVE A MOTHER OR SISTER? I WOULD LIKE TO KNOW..AS AN AMERICAN I HAVE MAKE A MEMORIAL SITE FOR ABEER..ABEER HAMZA SITE IS FOUND BY SEARCHING YAHOO BY HER NAME. SOMEONE PLEASE SHOW IT TO PIG SOLDIER MAN WITH NO MORALS..AMERICANS DO CARE......