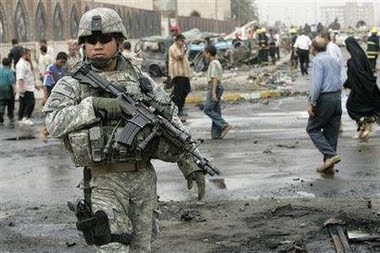 A U.S. -- not Iraqi -- soldier stands guard after Tuesday attack
One of the most insidious consequences of always putting politics ahead of policy in the Age of Bush has been the slow but inevitable unraveling of the administration's "strategy" in . Or "strategies," to be more accurate.

Having determinedly misled the public about why it was taking the U.S. to war, it stands to reason that the White House never came clean about the sacrifices that would be necessary to win the peace.

In fact, not only were Americans not asked to sacrifice, the rich were given a hefty tax cut and the rest of us the compassionate conservative's equivalent of a bag of salted peanuts. All the while, what actually was going on in Iraq was wrapped in a swadling of upbeat platitudes that the mainstream media swallowed whole.

Now comes Daveed Gartenstein-Ross, who is concluding an embed with the 2nd Battalion, 32nd Field Artillery in western courtesy of Public Media Inc., a great young organization co-run by that consummate embedder himself, Bill Roggio.

Gartenstein-Ross finds much positive to write about the surge, but then there's this shocker in a post at Roggio’s The Fourth Rail:

"Virtually all the U.S. officials with whom I spoke feel that American strategy now boils down to a single goal: strategic disengagement. That is, the wants to strengthen the Iraqi government to the point that it is self-sustaining enough that the country will not collapse into chaos as troops are brought back home. It’s unclear how long this will take. One Army staff sergeant who has worked closely with the Iraqi army and police thinks that 'several years' [italics mine] is the best estimate. . . . A official told me that in the past, the line was always that the was 'six months' away from turning the country over to the Iraqis. This was detrimental to overall planning, because strategy was geared toward maximizing results over the six-month period before the handover would allegedly take place. Now the military’s plans are more long-term: they are trying to look at what will be best for several years down the line, and placing less emphasis on when the commitment expires."

I want to cry when I read reports like this because, well, when it comes to Iraq the truth hurts like bloody hell.

And for the most part, U.S. commanders have merely been doing what the White House told them to do, knowing all the while that the president, his enablers and their grand sycophancy were drunk on that notoriously intoxicating neocon Kool Aid.

But now, in the fifth year of George Bush's Forever War, the punch bowl is empty.

The Kool Aid is gone.

The U.S. has run out of six-month turnarounds and the expiration date (pun very much intended) is drawing ever closer.

Photograph by Ali Jasim/Reuters
Posted by Shaun Mullen at 5:37 AM
Email ThisBlogThis!Share to TwitterShare to FacebookShare to Pinterest