Iraq: Anatomy of An Abduction & Search 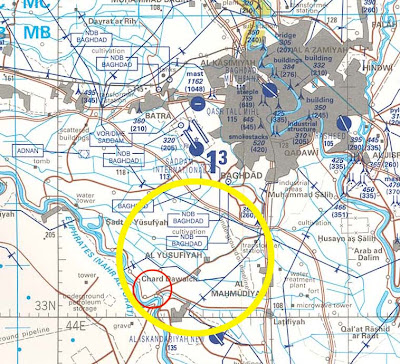 Search for abducted GIs is apparently concentrated within red circle

The setting of the biggest drama in Iraq at the moment -- the search for three American soldiers abducted in the Sunni Triangle by Al Qaeda insurgents -- is a strange one for people accustomed to seeing TV news footage of downtown Baghdad and vast stretches of desert.

The intense dragnet being led by 4,000 troops about 15 miles southwest of is in the fertile farming region of Yusifiyah and Mahmudiyah, which are abutted by the and amidst the cradle of Western civilization. Instead of streets and sands there are grasslands, irrigated farm fields and date palm groves reminiscent of parts of scoured and scorched by troops four decades ago.

"The capture of Americans -- like the hostages in in the Eighties or in the embassy in 1979 -- has traditionally had a greater impact on the public than the death of soldiers. It is the nightmare of American commanders, going all the way to the Commander-in-Chief, President Bush, for servicemen to be in enemy hands. The loss of these three prisoners could prove to be even more significant this time, as the public is already firmly against the war. A drawn-out hostage crisis, that ends in tragedy, could be the final blow to President's Bush's faltering support amongst Republicans."

Maybe so or maybe not so. The public is indeed already firmly against the war, but the incident is getting little coverage in the mainstream media and the focus of most Americans is, as usual, elsewhere. Another week of bad news -- even a hostage taking that could quite conceivably end tragically -- just isn't going to trip too many people's triggers, let alone represent a final blow to an isolated president who long ago squandered his credibility and is now being abandoned by many Republican congressfolk.

From the reports that we are getting, notably the detailed and nuanced accounts provided by Bill Roggio at The Fourth Rail, the search is going well enough that there is confidence the insurgents have been trapped in a box near the ambush site and have been unable to move the abducted GIs out of the region had that been their intention. That would be a hugely positive development given the past history of such snatches.

The ambush occurred early on Saturday morning when a patrol from the 4th Battalion, 31st Infantry Regiment of the 10th Mountain Division – which was way too small and way too isolated to fend for itself -- was overrun by insurgents.

When the first relieving force reached the scene an hour later – the delay was caused by concern over roadside bombs -- the burned bodies of four soldiers and an Iraqi Army interpreter were found. Three men had disappeared.

Al Qaeda quickly took responsibility for the abductions (it is not yet clear who the third of the three hostages is because one body was burned beyond recognition), but has not released any videotape or other information to substante the claim.

It did say that the ambush and abductions were in retaliation for the March 2006 rape of 14-year-old Abeer Qassim Hamza al-Janabi and murder of her family near Mahmudiyah.

The horrific crime was led by a small group of 502nd Infantry Regiment soldiers led Steven Green, a very sick 21-year-old man-boy who would never have been in Iraq had the Army not been so desperate for bodies that it scarfed him up while dragging the bottom of the societal barrel.

"You should remember what you have done to our sister Abeer," said a statement by the Islamic State of Iraq group.

A cover-up of the rape-murder might have stuck, but on June 13 of last year President Bush did a fly-by of in which he boasted about how how well the war was going. Three days later insurgents offered their own assessment by kidnapping, torturing, beheading and booby trapping the bodies of two of Green's comrades -- Kristian Menchaca and Thomas L. Tucker.

Like that terrain, the country where the insurgents are believed to be hiding out with the hostages is difficult to search because of irrigation canals and small channels from the .

"Paradoxically, this dangerous place, where even heavily armed troopers cannot survive, is a birthplace of civilization. Outside Yousifayah are the ruins of the ancient city of marked by the remains of a ziggurat. Twenty years ago Iraqi archaeologists excavated a temple here and found a library of Sumerian clay tablets neatly laid-out on 56 shelves and classified by topic."

The search is being led by and Iraqi patrols, supplemented by tribal forces from and Anbar provinces. There is considerable air support, including attack helicopters and pilotless drones. Thousands of leaflets offering a $200,000 reward for information have been dropped on the area.

Eleven suspected terrorists believed to be involved in the operation have been captured, including four who are said to be "high value suspects" who may have provided the information that allowed the patrols to trap the hostage takers in such a relatively small area.

"While it was initially thought the Al Qaeda assault and kidnap element would move the captured soldiers from the Mahmudiyah region into the desert expanses in eastern Anbar province, where Al Qaeda maintains a base of support, the Al Qaeda team appears to have stayed in the farming regions just south of . Either al Qaeda never planned to move the soldiers far from the capture point, or the cordon was established quickly enough to have trapped the terrorists in the box. The and Iraqi security forces maintains a network of forward outposts in Mahmudiyah, Yusifiyah and Sadr al Yusifiyah which would make safe transit through these regions difficult."

"Al Qaeda will want to broadcast footage of the captured soldiers both to demoralize the public and to reap the rewards of a major propaganda coup. The will likely have Internet access locked down in the region to prevent the tape from being transmitted digitally, but an individual courier should eventually be able to slip the cordon. If the kidnap cell did not bring its own recording equipment, it will either push to a safe house to make the recording, or a team will press to reach it. Either act can lead to exposing the location of the soldiers. But their chances of survival decreases as soon as the tape is made."

Map courtesy of The Fourth Rail
Posted by Shaun Mullen at 6:56 AM
Email ThisBlogThis!Share to TwitterShare to FacebookShare to Pinterest

iraq war big blurring for ameriki. not the good news coverage. this making ameirki stupid and the ignorant.

please remember: him iraki having the two gonad. for this him never stop the fighting.

him israeli controlling all usa people for kill the muslim for him master in tel aviv. neocon so many spy for israeli.

now ameriki so destroy, rotting from the inside out. ameriki woman the slut and take the LBT (low back tattoo).

son of ameriki him the homosexual loving sex with the iraq shia homosexual. wife the lesbian. kill abortion all baby. not the children from the woman. her having only the dog and cat.

for learning how ameriki become the so stupid read the two book:

a man called intrepid, by him william stevenson

inside the company, a cia diary by him phillip agee.

this book teach ameriki basic technique of the mind control.