Philadelphia At (Yet Another) Crossroads 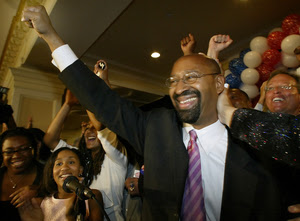 Philadelphia has always been a rough and tumble city, its politics bare knuckled and with the ascendancy of African-American office holders in the last 25 years, often racially polarized, as well.

But the five-candidate Democratic mayoral primary race that ended with a convincing victory by Michael Nutter last evening seemed especially rough and tumble.

Flyers were left outside of two Catholic churches charging Nutter, who is black and gave up his City Council seat to run for mayor, with being a compromised political insider who changed his religious beliefs (two decades ago from Catholic to Baptist) because it was politically advantageous. Nutter called his closest rival, Tom Knox, a white millionaire businessman and a churchgoing Catholic, a "low life" and "scumbag" and accused him of being behind the flyers. The racial subtext was not hard to see.

Nutter's victory in the overwhelmingly Democratic city makes him the mayor apparent, but the campaign histrionics have mask the really big question:

The murder rate is out of control in Philadelphia, one of four citizens live in poverty and city government is bleeding red ink. Can Nutter -- or anyone for that matter -- turn things around?

"[I]t only took about 325 years or so, but that's what Philadelphia finally becomes today: A modern American city, with a new optimistic spirit that is starting to match the upward march of our skyline, and the transformation of some of our great neighboodhoods.

That's not to say that Philadelphians aren't appalled by the corruption of the Street administration or the entrenched Democratic machine, or anguished by a murder rate that is soaring even as rival cities are seeing crime drop. They are -- and that's why so many voters turned to Nutter, who walked the walk on political reform during more than 14 years on City Council and who had arguably the toughest crime plan."

The epidemic of homicides has seemed especially intractable. As I noted in Crime and Punishment: A Tale of Two Cities, Philadelphia has bucked the national big-city trend of declining murder rates. There were more than 400 murders last year, the most in a decade and only about 150 less than New York City, which has a population four times as large. The total is likely to be even worse this year if the present rate of carnage continues.


There are three differences between the two cities that go a long way toward explaining the yawning per capita murder rate discrepancy and why Nutter will have his hands full:

* The proliferation of guns in Philadelphia.

New York City has some of the toughest gun laws in America. Philadelphia is hamstrung by not being allowed to have its own gun laws and must abide by Pennsylvania's notoriously weak laws.

A key to New York's success in getting guns off the street is the use of aggressive tactics, including police officers stopping and patting down people suspected of packing heat. That is taboo in Philadelphia because of decades of police brutality scandals, including officially sanctioned thuggery when Frank Rizzo was police commissioner and later mayor. Black Philadelphians have long memories.

* An unimaginative and risk averse political and civic culture in Philadelphia.

Efforts to overhaul the police department have been largely unsuccessful, there is no civilian oversight worth a damn and it has mattered little that the last several police commissioners are black and presumably more sensitive to the black community, where the vast majority of murders occur.

* * * * *
For decades, Philadelphia was one of the worst run cities in America. Its problems intensified following World War II when heavy industry withered and the population fell as people migrated to the suburbs and Sun Belt.

That began to change with the election of Richardson Dilworth, a liberal reformer who in 1956 became the first Democratic mayor since the late 19th century. Dilworth pushed through the adoption of a modern city charter that consolidated city and county offices, introduced civil service examinations to replace a patronage-heavy system and launched an extensive urban renewal program. He also left the police department pretty much alone.

While Dilworth was the right mayor at the right time, the same cannot be said of most of his successors. James Tate was a mediocrity, Frank Rizzo was a disaster, and W. Wilson Goode, Philadelphia's first black mayor and the first to drop a bomb on his own city, was incompetent.

In 1991, Philadelphians elected Ed Rendell, a former district attorney and present governor, who used the city's first (modest) economic boom in decades as a springboard to shake up the moribund tourist industry. This was followed by a revitalization of Center City that is ongoing. Rendell was less visionary when it came to the police department, which continued to bump along from scandal to scandal. He was succeeded by John Street, a onetime outsider who became an insider -- first as a city councilman from a grindingly poor North Philadelphia neighborhood and then as City Council president.

I admired Street when he was a rabble rousing community activist in the early 1980s determined to shake things up. But he has become a poster child for the concept of being part of the solution and then becoming part of the problem and has been a terrible disappointment as mayor.

A major component of "the problem" continues to be a reform allergic police department with a weak commissioner that is endlessly struggling to modernize and has found that making peace with a minority community roiled by that out-of-control murder rate is a bridge too far.

Whether Nutter can disprove Knox's charge that he's insider remains to be seem.

But as Phawker noted:

"Nutter has been the only candidate courageous enough to state the obvious: That Philadelphia is in the grip of a 'black genocide,' as self-inflicted from within as it is aggravated from without; that it simply a statistical fact that black people do most of the shooting and most of the dying in this city. It only perpetuates the crisis to pretend otherwise in the name of political expediency or white liberal guilt."

I became quite fond of Nutter and admired his dedication to public service during the years that I worked in Philadelphia, but being a nice guy isn't going to tamp down the crime epidemic.

If Nutter can light a fire under the police department and implement his promised "stop and frisk" program in the most violent neighborhoods, that would be a good start.

But only a start.

Photo by Steven M. Falk/Philadelphia Daily News
Posted by Shaun Mullen at 5:30 AM
Email ThisBlogThis!Share to TwitterShare to FacebookShare to Pinterest

Thanks for a thoughtful consideration of the future of a city I know well and love as a native of the region.

I'm guessing you read Gregory Gilderman's article in Philly mag. It paints a picture a little more complicated than the one you present. For instance, on the "Stop and frisk" issue:

"There’s another element to this story. A big-city police department is to some extent an extension of the political philosophy of its citizens and its mayor. Giuliani was a law-and-order conservative, and in New York in the mid-1990s, that’s exactly what that city’s voters wanted. White liberals and African-Americans were never won over by the man or his ideas, but they were outnumbered by the vast, politically moderate middle class of Queens and Staten Island. Philadelphia is different. There’s a moderate middle class in the region, but it’s largely in the suburbs. The political base of the city itself is African-Americans, and given the history of police brutality here, it’s difficult to imagine an idea that could inspire more suspicion than increased frisking in high-crime areas."

Now, I'm not a gunnie by any stretch, but I just don't see how Pennsylvania's "notorious" gun purchase laws are a root problem here. If it was that easy, New York thugs would just hop on I-80 and come over and fill their piockets with pieces, too, same as Philly, right?

The Gilderman piece seems to undercut you there, too:

"The basic facts of urban violence were not unlike what they are today. There were around 70 million handguns in circulation in the United States, many of them illegal and concentrated in the inner city. (Today, there are probably more than 100 million.) And the market for those guns was no less flexible than it is now: It seemed that no matter what efforts were made on the supply side — from permit denials to waiting periods to concealed-weapon bans — handguns, through theft or interstate straw purchase, found their way into the hands of criminals."