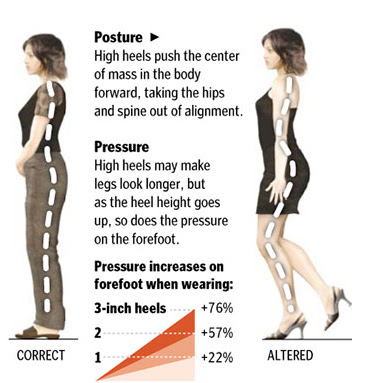 They're made for walking, jogging, hiking, even dancing.

But in the centuries since our ancestors first wrapped their feet in woven grasses and animal skins to protect them from rough surfaces, function has clashed with fashion in the design of our shoes. The crocodile-hide loafers and cowboy boots that cross paths with dress oxfords on today's city streets are often chosen for what they say about their wearer rather than for comfort.

Among women's shoes, fashion has truly trumped function. As the summer months approach, colorful sandals, flip-flops, wedges, high heels and ballet flats dot the sidewalks. One of trendiest shoes this season is YSL's platform "Tribute" -- with a tottering 5 1/2 -inch heel. Often painstakingly selected to complete outfits, shoes like these put stress not just on feet, but on ankles, knees and backs, contributing to the approximately $3.5 billion spent annually in the United States for women's foot surgeries, which cause them to lose 15 million work days yearly.

[T]here's a dirty little secret of the Iraq war that neither party is eager to acknowledge publicly: namely that the fastest way to defeat al-Qaeda in Iraq (AQI) is probably for us to leave and let the Iraqis do it themselves. Republicans don't want to acknowledge this for the obvious reason: they want to stay in Iraq and this doesn't help their cause. Democrats, I suspect, also don't want to talk too much about this, but for a different reason: because it tacitly condones the reason the Iraqis can do a better job than us of stamping out AQI. It's not just that Iraqis know their own neighborhoods better than us (though that's part of it), but that when it comes to exterminating AQI Iraqis would almost certainly be far more brutal about it than Americans. That's not really a subject anyone wants to bring up in polite company.

Mowaffak al-Rubaie, the national security adviser to Iraq's prime minister, undertook on Tuesday what may have been his most challenging mission yet: trying to persuade American lawmakers who have all but run out of patience that still more patience is required.

Secretary of State Condoleezza Rice may make the headlines with her high-profile diplomatic missions to the Middle East. But for a glimpse at the hidden power plays, follow Vice President Cheney's trip this week to Saudi Arabia.

Saudi King Abdullah has emerged over the past nine months as the Bush administration's most important and strong-willed Arab ally. He launched an aggressive campaign last fall to contain Iranian influence in the Arab world and, in the process, buttress American interests in the region despite U.S. setbacks in Iraq. It's Cheney, whose blunt, unsmiling demeanor matches Saudi notions of American gravitas, who manages the Abdullah account.

Bingo! I think we have our 9th fired U.S. attorney -- and one replaced in short order by one of the Bush DOJ's prime "vote fraud" scammers.

Demography is destiny. When I was in kindergarten in 1950, Detroit was the nation’s fifth largest metro area, with 3,170,000 people. Now it ranks 11th and is soon to be overtaken by Phoenix, which had 331,000 people in 1950. In the close 1960 election, in which electoral votes were based on the 1950 Census, Michigan cast 20 votes for John Kennedy and Arizona cast four votes for Richard Nixon; New York cast 45 votes for Kennedy and Florida cast 10 votes for Nixon. In 2012, Michigan will likely have 16 electoral votes and Arizona 12; New York will have 29 votes and Florida 29. That’s the kind of political change demographics makes over the years.

Under the law, employers with state contracts will generally have to pay workers a minimum amount — $11.30 an hour in the Baltimore-Washington corridor and $8.50 an hour in the rural counties, where wages and prices are usually lower.

The Maryland state minimum wage is $6.15 an hour, one dollar above the federal minimum.

I’ve just read that Tammy Faye Messner, who’s been fighting cancer for the third time, has stopped treatments, which makes me really sad, because I adore her.

You might remember her better as Tammy Faye Bakker, the mascara-laden wife of erstwhile televangelist Jimmy Bakker, who made Tammy Faye cry, famously, when he was caught with his pants down and his hand in the cookie jar.

Even though her husband, and many of their PTL associates, seemed like insincere rabble, just out for the last dimes in the handbags of little old ladies, Tammy always struck me as the genuine article—a woman who was filled with boundless faith and love. She also seemed like someone with whom I’d really enjoy sitting and having a long conversation, diametrically different as we are, because she was interesting and thoughtful, and most of all, very funny.

Bush is portrayed as a moron. I’ve only conversed with him a couple of times – not for very long – but I found he was more literate on literature than the editor of the New York Review of Books, Bob Silvers. I’ve talked to both of them, and he makes Bob Silvers look like a slug.