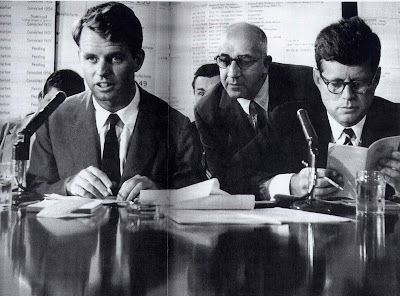 [Robert F.] Kennedy had another revealing phone conversation on the afternoon of Nov. 22 [1963]. Speaking with Enrique "Harry" Ruiz-Williams, a veteran who was his most trusted ally among exiled political leaders, Bobby shocked his friend by telling him point-blank, "One of your guys did it." Who did Kennedy mean? By then Oswald had been arrested in . The CIA and its anti-Castro client groups were already trying to connect the alleged assassin to the regime. But as Kennedy's blunt remark to Williams makes clear, the attorney general wasn't buying it. Recent evidence suggests that Bobby Kennedy had heard the name Lee Harvey Oswald long before it exploded in news bulletins around the world, and he connected it with the government's underground war on Castro. With Oswald's arrest in , Kennedy apparently realized that the government's clandestine campaign against Castro had boomeranged at his brother.

I can only imagine the special agony reserved for a professional military man to lose a child in a war he has now spent years arguing was a mistake.

The GOP could run the Risen Christ as a candidate in ’08, but if the Iraq/Afghanistan war has not been brought to some satisfactory conclusion, or to well within sight of such, by voting day, we shall lose.

If you are hoping for such a conclusion, as several other of my colleagues are, good luck to you. I can’t share that optimism. Nothing I see out of the suggests to me that we are driving the events there. Far too many of the actual drivers — the jihadists and their enablers in , , — retain enough initiative to turn to dust anything we might accomplish. Second-order unknowns — political events in Pakistan, Turkey, Palestine — add a further layer of uncertainty, a layer very little of which is colored red, white, and blue.

If my pessimism is justified — and come on: In the long dark watches of the night, you know it is — the only set of candidates worth our scrutiny are the Democrats. For a Republican to win in ’08, he’s going to have to be a credibly anti-war Republican. That narrows the field down to Chuck Hagel and Ron Paul. See what I mean?

When President Bush spoke to the nation soon after Hurricane Katrina, he was resolute that the city would be rebuilt. "We will do what it takes," he said. We — the federal, state and city governments; elected officials and the citizens who hire them — have failed spectacularly. Homes and schools remain empty or imaginary; evacuees and survivors wait in cramped trailers, unable to return or rebuild. A huge silence still hangs over the Lower Ninth Ward, a place every American should see, to witness firsthand how truckloads of promises have filled New Orleans’s vast devastation with nothing.

I have to admit, writing about [Jerry] Falwell’s death poses an awkward challenge for me. When I worked at Americans United for Separation of Church and State for several years, I read Falwell’s materials, I listened to his speeches, I watched his interviews, and got a real sense for who this man was and what he devoted his life to. In literally every instance, I was repelled and appalled. But is it not callous to bash a man just hours after his death?

He lived a decent-length, if not long, life. One hopes he finds that his God is a more forgiving being than he believed.

Megan McArdle’s dog, Finnegan, contracted an infection and had to be put to sleep. She posted about it. I thought: soon, some gobshite will show up in the comments, deriding the way she felt at four in the morning the night her dog died. And sure enough. Gotta love the intertubes. Meanwhile, Jerry Falwell has died, too. In terms of net good brought into the world during their respective lives, Megan’s dog is probably ahead of Falwell.