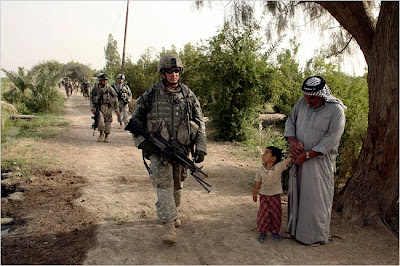 STILL SEARCHING
The lonely vigils continue in four communities for the two missing soldiers seized in a May 12 ambush.

Neighbors of Maria del Rosario Duran, the mother of Specialist Alex R. Jimenez, have tied yellow ribbons to fences, around trees and on doors on her home in the Corona neighborhood of Queens to show their support for the family. The scene is similar in the town of Lawence, Massachusetts, where Jimenez's father, Ramon Jimenez, lives, and at Fort Drum, New York, where wife Yaderlin resides, as well as in Lake Orion Township, Michigan, home of the adoptive family of Private Byron R. Fouty.

"I can't take a breath without thinking about it. His life is more than a news ticker. He's my hero."

* * * * *
DNA tests are being run on a body that could be that of one of the two missing soldiers seized in the ambush.

Military officials warned that the body, found Sunday at an undisclosed location, did not initially appear to fit descriptions of either Jimenez or Fouty, but there was a suggestion that it was not that of an Iraqi.

Meanwhile, insurgents continue to use tactics elsewhere in similar to those that precipitated the ambush-kidnappings.

"They are an adaptive, difficult enemy with an ability to change tactics to adapt to what’s happening on the ground."

Photograph by Michael Kambor for The New York Times