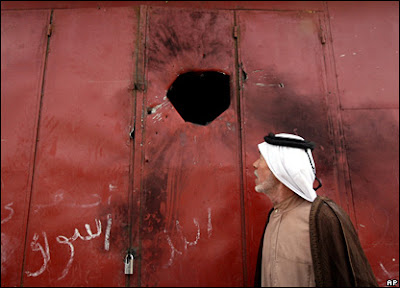 -- JOE GANDELMAN
It is not enough to complain about President Bush, or to mock him. To mock the president does not relieve one from responsibility for the war being fought in the name of every American. Bush's disaster has become the country's disaster. Every American is now connected to it politically and morally. We cannot be indifferent to the scorn for all things American that characterizes the worldview of us. We must pay attention. It should move us.

In our safe zone, the hypocrisy toward our troops is another instance of moral and political guilt. When a person flaunts his patriotism and then tolerates the exploitation of soldiers, then that citizen is morally culpable for that outrage and a participant in it. Even during the Vietnam War, when I was a soldier for three years, no soldier was sent back to the jungle against his will for second and third tours.

-- JAMES RESTON Jr.
A sharp increase in mortar attacks on the Green Zone — the one-time oasis of security in Iraq's turbulent capital — has prompted the U.S. Embassy to issue a strict new order telling all employees to wear flak vests and helmets while in unprotected buildings or whenever they are outside.

The Army is sending a company of Europe-based soldiers back to before the unit has had a full 12 months of “dwell time,” or at-home rest.

Members of the 1st Armored Division’s 1st Battalion, 6th Infantry, Company A, learned Tuesday that they are scheduled to head back to in November, just nine months after the 150-soldier company left the combat zone in February after a 13-month deployment.

. . . … asked about the situation, [Defense Secretary] Gates said he could not explain why the Army was sending back the company from just nine months after its last deployment.

"I’ll be very interested in finding out more about that," Gates said. "We just need to find out about that, because I made it clear that people would have 12 months at home."

Karl Rove should have resigned long ago, if President Bush's word meant anything. Of course it does not and never will. That is why this charade on and the GOP we were provided yesterday is so much nonsense. But what kind of a person is Alberto Gonzales? Is he so lacking in personal dignity, lacking in ability to be ashamed, that he will "persevere" in the face of being exposed as an incompetent Bush footstool who is destroying the Justice Department? The answer is yes.

The jihad-mongers of the right blogosphere have been so busy congratulating themselves for finally having proof -- proof, dammit! -- of their long-running thesis that Muslims are secretly plotting everywhere in America to engage in terrorist attacks, namely, the Fort Dix gang that purportedly was planning to attack an Army base.

The claims about the actual threat these fellows posed have reached quite a fever pitch, as have the claims about the role of citizen "John Does" -- heavily touted by Michelle Malkin -- in the arrests. Suffice to say that the evidence so far does not suggest that this gang was any more likely to actually succeed than the Tri States Militia, which planned a similar attack on , back in 1997.

I think there’s a passion for Hillary Clinton’s candidacy that’s almost as invisible to the Democratic-Party netroots as Karl Rove’s vote drive among evangelicals was in 2004. Only very occasionally does this passion glimmer into the view of the progressive blogosphere. My claim is basically that the Clinton voters are out there mostly nursing their allegiance quietly, like the classic quiet conservatives keeping their opinion to themselves until they get into the voting booth.

After months of conflicting signals on abortion, Rudolph W. Giuliani is planning to offer a forthright affirmation of his support for abortion rights in public forums, television appearances and interviews in the coming days, despite the potential for bad consequences among some conservative voters already wary of his views, aides said yesterday.

"Conventional wisdom says he can't" win the nomination, said Mike DuHaime, Mr. Giuliani's campaign manager, who then played down the significance of the discordance between Mr. Giuliani and much of his party on abortion and other social issues. "But we believe that based on his record in , based on his leadership when was tested on Sept. 11, that he can."

The company that makes the narcotic painkiller OxyContin and three current and former executives pleaded guilty today in federal court here to criminal charges that they misled regulators, doctors and patients about the drug’s risk of addiction and its potential to be abused.

To resolve criminal and civil charges related to the drug’s “misbranding”, the parent of Purdue Pharma, the company that markets OxyContin, agreed to pay more than $600 million in fines. That is the third-highest amount ever paid by a drug company in such a case.

A French court sentenced a Saudi prince to 10 years in prison for abusing his role in a large-scale cocaine smuggling operation. But the prince isn't likely to see the inside of a cell anytime soon.

Saudi Prince Nayef bin Sultan bin Fawwaz al-Shaalan, believed to be living in Saudi Arabia, did not appear at today's hearing, or the trial which preceded it, and was sentenced in absentia by the court. It also fined him $100 million for his role in the plot to smuggle two tons of cocaine from to an airport outside in 1999.