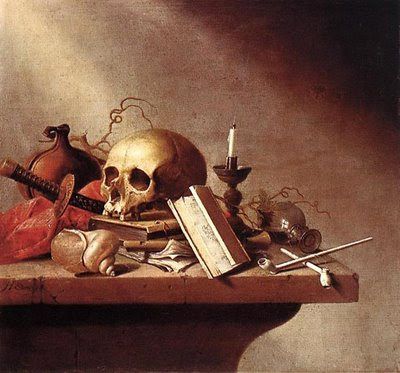 "La Justice Caricaturée" by Robert LeVigan
My occasional penchant for hyperbole duly noted, the suspension of habeas corpus is the single most destructive thing that the Bush administration (and a compliant Congress) have done over the last six-plus years, and that’s saying a lot considering that war thingie.

For too many Americans, the suspension of certain civil liberties after the 9/11 attacks has been an abstraction, something that applies only to people with funny headgear and fanatical beliefs who are incarcerated in the Rumsfeld Gulag.

In fact, there is a good argument to be made that habeas corpus does not apply to non-U.S. citizens, who include the vast majority of so-called enemy combatants.

That so noted, habeas corpus is not some bleeding-heart concept. It is one of the pillars on which the American criminal justice stands and has served the nation well in times of war and peace for over 200 years. This means that habeas corpus is anathema to the Bush administration, which has thumbed its nose at the Rule of Law at almost every turn.

Habeas corpus was given the heave ho in the Military Commissions Act of 2006, a piece of legislative thuggery that in suspending habeas corpus gave the president the power to detain people indefinitely, not to mention torture them.

The re-ascendant Democrats say that they intend to restore habeas corpus and that effort was to have begun in the House Armed Services Committee where there was a move to legislate the restoration through a provision in the Defense Authorization Bill. That did not happen.

Glenn Greenwald gets it just right when he says:

"Having disgracefully abdicated that responsibility back in September because they wanted to win the midterm elections, Democrats -- now that they have won -- can cleanse their historic sin only by committing themselves, not symbolically but in actuality, to the restoration of habeas corpus. Whether they are willing to do so will speak volumes about their true character and about whether their November victory will result in anything other than some televised hearings. If Democrats are too afraid even to take a stand against the Bush administration in defense of this centuries-old core American liberty, it is impossible to imagine any even minimally risky stands they are willing to take"