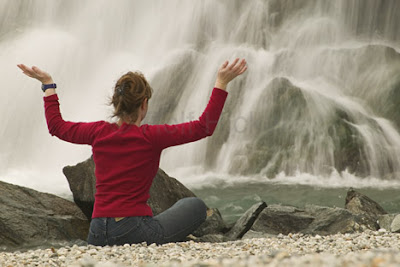 I grew up watching my father stand on his head every morning. He was doing sirsasana, a yoga pose that accounts for his youthful looks well into his 60s. Now he might have to pay a royalty to an American patent holder if he teaches the secrets of his good health to others. The United States Patent and Trademark Office has issued 150 yoga-related copyrights, 134 patents on yoga accessories and 2,315 yoga trademarks. There’s big money in those pretzel twists and contortions — $3 billion a year in America alone.

It’s a mystery to most Indians that anybody can make that much money from the teaching of a knowledge that is not supposed to be bought or sold like sausages. Should an Indian, in retaliation, patent the Heimlich maneuver, so that he can collect every time a waiter saves a customer from choking on a fishbone?

The Indian government is not laughing. It has set up a task force that is cataloging traditional knowledge, including ayurvedic remedies and hundreds of yoga poses, to protect them from being pirated and copyrighted by foreign hucksters. The data will be translated from ancient Sanskrit and Tamil texts, stored digitally and available in five international languages, so that patent offices in other countries can see that yoga didn’t originate in a San Francisco commune.

-- SUKETU MEHTA
The rebuilding effort in tornado-ravaged Greensburg, Kansas, likely will be hampered because some much-needed equipment is in Iraq, said that state’s governor.

Governor Kathleen Sebelius said much of the National Guard equipment usually positioned around the state to respond to emergencies is gone. She said not having immediate access to things like tents, trucks and semitrailers will really handicap the rebuilding effort.

Over the last four months, the Iraq deliberations in Congress have lurched from a purely symbolic resolution rebuking the president’s strategy to timetables for the withdrawal of American troops. Behind the scenes, an elaborate political operation, organized by a coalition of antiwar groups and fine-tuned to wrestle members of Congress into place one by one, has helped nudge the debate forward.

Almost a year ago the U.S. Army Corps of Engineers declared that it had restored ' levees and floodwalls to pre-Hurricane Katrina strength.

But the system is actually riddled with flaws, and a storm even weaker than Katrina could breach the levees if it hit this year, say leading experts who have investigated the system.

As many of you have surely noticed, Empire Burlesque has been under sustained attack by hackers for the past several weeks, with occasional slowdowns or cut-offs in service, and viral infections. What we are seeing is a very serious, very concentrated effort to cripple the site, make it toxic and bring it down -- to shut us up, in other words. . . . These are not just hacker pranks; the attacks are almost certainly politically motivated: a deliberate attempt to destroy two platforms which offer news and opinions that some powerful entities -- or their bootlicking wannabes -- don't like.

Feminist blogger Garance Franke-Ruta, in a piece in the Wall Street Journal's Opinion Journal, has an interesting article on what should be done about Joe Francis, the auteur behind the Girls Gone Wild videos. Franke-Ruta has hit on excellent solution for driving him out of the business of preying on drunk college girls. She wants to raise the minimum age for consenting to participate in hard- and softcore pornography to 21.

By age 15 approximately half the boys and girls in have had a whole drink of alcohol, according to a report by the U.S. Surgeon General.

While binge drinking is going down, there's been a big change between the ages of 12 and 14, where girls are drinking more than boys. . . . The Centers for Disease Control call that an alarming trend.

All his life the science fiction writer Philip K. Dick yearned for what he called the mainstream. He wanted to be a serious literary writer, not a sci-fi hack whose audience consisted, he once said, of "trolls and wackos." But Mr. Dick, who popped as many as 1,000 amphetamine pills a week, was also more than a little paranoid. In the early '70s, when he had finally achieved some standing among academic critics and literary theorists — most notably the Polish writer Stanislaw Lem — he narced on them all, writing a letter to the F.B.I. in which he claimed they were K.G.B. agents trying to take over American science fiction.

So it’s hard to know what Mr. Dick, who died in 1982 at the age of 53, would have made of the fact that this month he has arrived at the pinnacle of literary respectability. Four of his novels from the 1960s — "The Man in the High Castle," "The Three Stigmata of Palmer Eldritch," "Do Androids Dream of Electric Sheep?" and "Ubik" — are being reissued by the Library of America in that now-classic Hall of Fame format: full cloth binding, tasseled bookmark, acid-free, Bible-thin paper. He might be pleased, or he might demand to know why his 40-odd other books weren’t so honored. . . . A wary, hard-core Dickian might argue that the Library of America volume is just a diversion, an attempt to turn a deeply subversive writer into another canonical brand name.