The Ridiculousness of Gasoline Prices 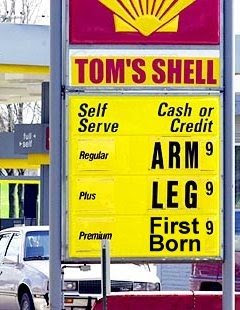 You don't have to be paranoid to believe that the White House orchestrated the extraordinary drop in gasoline prices just as mid-term elections crucial to the Republican Party were approaching last fall.

But while the Bush administration probably would like to take credit for that, it can't. The president of the may be a very powerful dude and this one might be a son of the Texas Oil Patch, but the arcane machinations of the giant oil companies and the global oil market are beyond even his long reach.

The reason that American motorists were paying nearly a dollar less at the pump last November than they were 10 weeks earlier was banal in the extreme:

It was hedge fund investors who were betting the ranch that there would be a repeat of the devastating 2005 Atlantic hurricane season who sent prices -- and oil company profits -- soaring.

These investors had poured gadzillions of dollars into long-term positions in oil, gasoline, natural gas and other energy commodities and took a bath last August when the 2006 hurricane season forecast was radically downgraded. Gas prices plummeted as a result.

The reason that American motorists are now paying nearly a dollar more at the pump than they were last November is equally banal:

There has been an uptick in the never ending violence in Nigeria, a major oil exporter, concerns over the forthcoming hurricane season and the usual yada yada by oil companies making obscene profits that they are having difficulty with their refinery infrastructure, all exceeding lame exuses since there are ample supplies of gasoline, natural gas and other energy commodities at the moment.

The whole subject of gasoline prices makes me want to tear out my few remaining hairs.

On the one hand, oil companies are so rapacious and so powerful that even congressional efforts to bring them to bay won't get anywhere.

On the other, U.S. gasoline prices have been historically low compared to the rest of the universe, although I don't like paying 40 smackeroos for a fill-up of regular unleaded any more than you do.

On the third hand, continuing U.S. reliance on foreign oil and the failure of government and industry to get behind alternative energy resources in a really big way is beyond dumb.

On the forth hand, we have the usual muddled BS of some analysts saying that prices will spike this summer and others saying that they will go down.

Get over it, bucko.