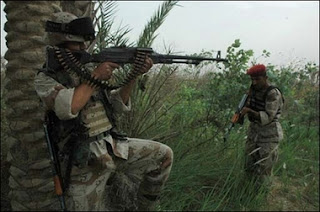 IRAQI TROOPS SEARCH FOR MISSING GIs
It has been five days since four American troops and an Iraqi Army interpreter were ambushed and killed in the Triangle of Death by Al Qaeda insurgents and three troops were taken hostage, and with a massive dragnet in place it is fair to ask whether it is having a negative impact on the surge.

The answer, according toa knowledgeable source, is yes.

Bill Roggio confirms that two battalions have been pulled out of Baghdad to join the search, including a Special Operations battalion that was patrolling Sadr City, and two helicopter batallions also have been thrown into the mix.

The source said that there is no evidence that the ambush-kidnappings were specifically designed to hurt the surge.

"The patrol was a target of opportunity," he explained, "and the insurgents took it. It's propoganda effect is huge and it certainly is creating chaos."

There also have been these developments since my in-depth report on the incident on Wednesday:

* Sixteen suspects have been detained, including two who apparently confessed to taking part in the attack, and equipment has been recovered that might have belonged to the missing soldiers. The detainees appear to be middle men who were hired by the insurgents.


Col. Michael Kershaw, the commander of the Second Brigade Combat Team of the 10th Mountain Division — the unit that was attacked and that is leading the search — said roughly 4,000 American and 2,000 Iraqi troops had pursued a series of tips that had led to the equipment and the detainees, along with many dead ends. At one point, soldiers drained a canal after a tip that bodies were being dumped there.

An additional battalion was sent into the area on Wednesday. Helicopters are flying search missions around the clock and dogs used for finding bodies and bombs are accompanying foot patrols.

* The search area south of Baghdad has been divided into 35 sectors, 32 of which have been searched, but the hunt also has been extended to regions south and east of Fallujah in Anbar province, according to a earlier report by Roggio. This is a region where Al Qaeda maintains a strong base of support and where it was initially believed insurgents would take the captives.

* It remained unclear how the soldiers were attacked, although it is suspected that grenades or rocket-propelled grenades were involved.

Lieutenant Colonel Michael Infanti, the battalion commander for the unit attacked — Company D, Fourth Battalion, 31st Infantry Regiment — said the road near the Euphrates River where the ambush occurred had houses on either side.

Infanti said the attack as "complex." Concertina wire around the troops' two Humvees had been breached, and shell casings around the vehicles suggested that the soldiers had put up a fight.

* The dog tags of one of the four American soldiers who died are missing and apparently were taken from the scene by the attackers. That could explain why the military has only been able to identify three of the four dead soldiers.

* A military investigation has concluded that three U.S. soldiers slaughtered in a grisly kidnapping-murder plot in June 2006 near this week's ambush were not properly protected during a mission that was not well planned or executed.

A report on the investigation said the platoon leader and company commander failed to provide proper supervision to the unit. They have been relieved of their commands but do not face criminal charges.

A summary of the investigation provided to The Associated Press also said it appears insurgents may have rehearsed the attack two days earlier, and that Iraqi security forces near the soldiers' outpost probably saw and heard the attack and "chose to not become an active participant in the attack on either side."

Al Qaeda has said that the kidnapping-murders were in retaliation for the March 2006 rape of 14-year-old Abeer Qassim Hamza al-Janabi and murder of her family near Mahmudiyah.

Photograph: AFP
Posted by Shaun Mullen at 6:23 AM
Email ThisBlogThis!Share to TwitterShare to FacebookShare to Pinterest