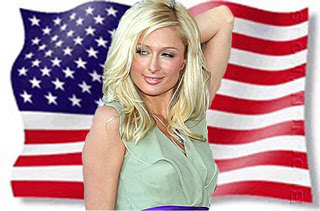 Paris Whitney Hilton is an American celebrity and socialite. She is an heiress to a share of the Hilton Hotel fortune, as well as to the real estate fortune of her father Richard Hilton. She provides hope for young people all over the and the world. She provides beauty and excitement to (most of) our otherwise mundane lives.

Katharine Hepburn, who demolished brontosaurus skeletons and male egos in “Bringing Up Baby” and held her own with the King of England in “The Lion in Winter,” would have been 100 today. When she died four years ago at 96, she was hailed as an American icon, celebrated for her strength and independence.

But there was another side to Hepburn, too — more vulnerable, conflicted and ambitious than we knew. Though she liked to appear indifferent to vulgar stardom, she worked hard — very hard — for fame. And she never stopped, enduring fickle tastes and changing times because her desire to be great never waned. While she made us believe she was somehow above Hollywood hoopla, the truth was that long before stars employed staffs to micromanage and refine their public images, Hepburn was inventing a path for others to follow.

[I]t seems likely that in the divine order of things there are a certain number of unbaptized infants who die each year and if they are now permitted to enter heaven, their entry will occur in an orderly fashion. Those presently in limbo present an entirely different problem. There are surely billions of unbaptized infants cavorting about in unsupervised perfect happiness in limbo. Although all may not want to leave their perfectly happy state, others may welcome the chance to get to heaven which, even though none of them as been able to visit it, almost certainly enjoys as good a reputation in limbo as it enjoys here on earth. If billions decide all at once that they want to go to heaven, the question is can heaven accommodate what might be described in today’s parlance as a "surge."

By the numbers, divorce just isn't what it used to be.

Despite the common notion that remains plagued by a divorce epidemic, the national per capita divorce rate has declined steadily since its peak in 1981 and is now at its lowest level since 1970.

Yet Americans aren't necessarily making better choices about their long-term relationships. Even those who study marriage and work to make it more successful can't decide whether the trend is grounds for celebration or cynicism.

Some experts say relationships are as unstable as ever—and divorces are down primarily because more couples live together without marrying. Other researchers have documented what they call "the divorce divide," contending that divorce rates are indeed falling substantively among college-educated couples but not among less- affluent, less-educated couples.

A new study by quirky psychologist Richard Wiseman has revealed that people's average walking speed in cities has increased by 10 percent in the last decade.

The annual migration of the cruise ships began this week, and along with it the entire corporate ecosystem of erupted into life. It's pissing outside -- we live in a rainforest, after all -- but no one is deterred. Non-locally-owned tourist shops opened their doors, ready to discharge cheap t-shirts and baseball hats into the narcotized hands of befuddled tourists; restaurants nudged their prices ever so gently upward; fleets of buses and trolleys, hungry for sweet, rich pedestrian blood, disembarked from their winter lairs; helicopters and float planes began dotting the skies like a scene from Apocalypse Now; and the entire city was suddenly filled with young, attractive men and women working summer jobs that involve rafting, kayaking, hiking, and smoking lots and lots of marijuana.

Posted by Shaun Mullen at 4:01 AM
Email ThisBlogThis!Share to TwitterShare to FacebookShare to Pinterest

Shaun, I appreciate that you find Blognonymous entertaining enough to include in your 'Quotes From Around Yon Blogosphere' post. And the first time you pulled one of my 'paste-ups' with a simple blog citation--but no link back to the original post--I was willing to let it slide.

Credit where credit is due Mr. Mullen.

These articles are fantastic; the information you show us is interesting for everybody and is really good written. It’s just great!! Do you want to know something more? Read it...:Great investment opportunity in Costa Rica: condo costa estate real rica, condo costa rica, condos for sale in costa rica. Visit us for more info at: http://www.jaco-bay.com/

Costa Rica is a country with a extremely sense of freedom. The landscapes are for much the most green in whole center america.The chances of investement are way to high, the average of Americans, European and people of the entire planet who is buying here is up in the sky !!! The best investment opportunity in Costa Rica: costa rica real estate, real estate beach,costa rica condos. Visit us for more information at: http://www.costa-ricarealestate.com