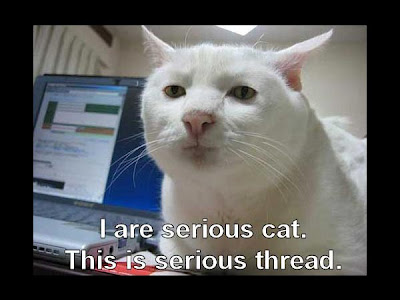 No one knows who put the first cat picture on the Internet, but they have since become an unstoppable, mutating force. The photo site Flickr is awash with cat clusters, the Random Kitten Generator finds daily converts, YouTube has an international trade in cat videos, and those are just the obvious examples. When I worked at a Web magazine in the mid-90s, we used to joke that more people uploaded pictures of their cats to their home pages than read our articles. That joke became less funny when it turned out to be true. The cat you are gazing at is known as Happycat. He or she (I'm not a cat person) is the inspiration for the Web site I Can Has Cheezburger?, which started in January. The site collects and tags examples of lolcats, i.e., laugh-out-loud cats, the latest Internet humor boomlet.

Depending on how one keeps score, we’re currently enduring the third (or fourth, or fifth) Al Gore Boomlet.

Due to a theater-wide delay in food delivery, menu selections will be limited for the near future. While every effort will be made to provide balanced meals, it may not be possible to offer the dishes you are used to seeing at each meal. Fresh fruits and salad bar items will also be severely limited or unavailable.

The bottom line is that our troops depend on a ground supply line that runs from to the various bases in . When I was in last year at the base in Balad I had the chance to eat four meals a day--breakfast, lunch, dinner, and rations (midrats). If you like late nights the midrats were great--steak, eggs, pancakes. Pretty good food. Well, based on this memo, it looks like those were the good old days. We don't have enough convoys to give our troops three hot meals a day. We want them to step up the patrolling. We want them to search 24-7 for missing soldiers. But, by God, they don't deserve three hot meals a day.

Excuse my rudeness, but that is fucked up. Way to go General Petraeus.

It "just snowballed into a not good situation."

Monica Goodling’s first-rate law school education was on displaying yesterday in an astonishingly nit-witted but dry-eyed appearance before the House Judiciary Committee regarding her role in the Attorneygate scandal.

Quoting constitutional scholar Martha Stewart, among others, Goodling acknowledged in testimony given under a grant of immunity that she had made a “snap judgment” in weeding out job candidates based on their partisan bona fides.

A "snap judgment" that she made numerous times.

Just when you think the duplicity of Bush administration hirelings couldn’t get any worse, along comes a Bible-thumping bottom feeder like Goodling.

When the history of these times is written 100 years from now – that is, if the west is vouchsafed such a luxury as surviving that long – historians will view the role of the free press in the western world with a combination of confusion and awe. Confusion because they will look in vain for evidence that many in the media were actually working for the enemies of freedom, so often it seemed they played directly into their hands or seemed to do their bidding. And a feeling of awe that those professing to be so intelligent could act with such towering idiocy and irresponsibility.

A pair of gay flamingos have adopted an abandoned chick, becoming parents after being together for six years . . .

Carlos and Fernando had been desperate to start a family, even chasing other flamingos from their nests to take over their eggs at the Wildfowl and Wetlands Trust (WWT) in Slimbridge near Bristol [England].

But their egg-sitting prowess made them the top choice for taking an unhatched egg under their wings when one of the Greater Flamingo nests was abandoned.

The couple, together for six years, can feed chicks by producing milk in their throats.

Posted by Shaun Mullen at 3:40 AM
Email ThisBlogThis!Share to TwitterShare to FacebookShare to Pinterest