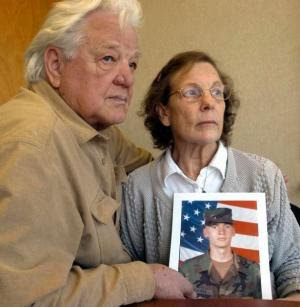 Ten days on, the bodies of the four soldiers ambushed by insurgents in the Triangle of Death on May 12 have arrived stateside, been processed through the massive military morgue at Dover (Del.) Air Force Base and have been returned to their hometowns.

There was a memorial service for Sergeant First Class James D. Connell last Friday in East Tennesse. He will be buried at Arlington National Cemetery on Friday.

In Nevada, flags are being flown at half staff in memory of Sergeant Anthony J. Schober.

Schober's father, Edward, recalled the 9/11 attacks as a turning point in his son's life:

Schober's posthumous Purple Heart will be his second -- and one of eight medals -- earned during six years of service and four tours of duty in . He had been wounded on a previous tour of duty in , suffering a fractured jaw that had to be wired shut for about a month when he was blasted from a Humvee.

"I don't think he had any regrets. He just wanted to get the job done. He'd come back and forth quite a bit. He'd get more special training and go right back. . . .

In Lake City, Florida, residents lined the main street as a motorcade bearing the flag-drapped coffin of Connell drove slowly by, evoking both pride and pain.

Said Maria Hooks, a friend of the family:

"He did what he did so I can go to work everyday and play with my niece. I do what I do on a daily basis because of people like him. We owe him our life."

MEANWHILE, BACK AT THE RANCH
CNN reported that searchers are focusing on a nine-mile radius around the site of the May 12 ambush in their dragnet for three missing soldiers, although Bill Roggio and colleagues note that raids in connection with the search also are being conducted as far away as Amiriyah in Anbar Province.

Military commanders still are maintaining that at least two of the soldiers are alive and being held by an Al Qaeda-affiliated group.

Authorities detained 14 people Monday within the search area. Some detainees are released after questioning, while only those who may have directly participated in the attack, have first-hand knowledge of the attack, or can help locate the missing soldiers are being placed under military custody.

'A MESSED UP YEAR'
In his last MySpace entry, one of the three missing soldiers called his time in Iraq "a messed up year," mourned his grandmother's death from cancer in 2005, and lamented a comrade's suicide.

Private Byron Fouty, who as a teen had had a troubled home life and lived with a friend and his family in Michigan. wrote:

"This year has been coated with nothing but bad news, very little good news shining through."

A BAGHDAD BLOGGER SPEAKS
The 30 or so Iraqi bloggers whom I read have been conspicuously silent about the ambush-abductions.

That’s no big deal when you consider that many tens of thousands of their countryfolk have died in the war and thousands more are missing. A mere 3,400 or so Americans and three missing GIs pale in comparison.

Omar Fadhil, who blogs at Iraq the Model and Pajamas Media, is an exception:

"I have to say that I found some parallels with the kidnapping of two other soldiers in the same area last year: they all took place only days after the capture or killing of senior al-Qaeda leaders and the launch of major security operations. Last year, the two soldiers were kidnapped only a week after Zarqawi was killed and two days after the government launched Operation Forward Together in Baghdad; this time, there were also a few senior al-Qaeda commanders killed just two weeks ago. And although Operation Imposing Law is three months old, a new campaign is just starting in Diyala. US commanders recently announced that 3,000 additional troops would be sent there to reinforce the units already there, and it looks like the kidnapping is an act of distraction or, rather, an attempt to force US commanders to redirect thousands of troops to a rescue mission, preventing the troop buildup in the region where the main bases of al-Qaeda are located. In other words, to keep pressure off the mother cells."