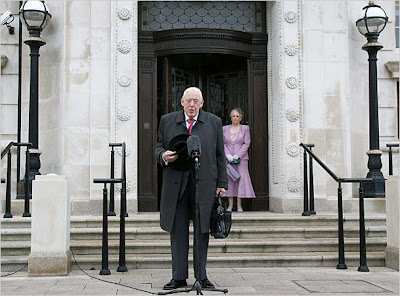 Ian Paisley speaks as Northern Ireland power-sharing re-commenced
The news that once bitter foes joined ranks today as re-established power sharing should be a cause for celebration at a time when sectarian conflicts, most notably in and , seem to be without end.

But this watershed event in Belfast leaves this (half) Irishman feeling . . . well, feeling like shaking hands and agreeing to get along is merely a prelude to a lasting peace in the long-troubled province, and there already have been far too many preludes and still no lasting peace.

The decades of violence, most notably that perpetrated on ’s Catholics by the British government and its army, cannot be wished away nor shall they be.

And there is, in a sense, less than meets the eye to Martin McGuinness and Ian Paisley making nice at the Stormont Assembly.

McGuinness is deputy head of the predominately Catholic Sinn Fein, while is leader of the dominant Protestant party. What they agreed to is the end of a suspension of the local authority declared in October 2002, in a dispute over allegations of espionage by the Irish Republican Army. The province has been ruled from since then.

The long sectarian war has been hell and peace elusive. Will it be any different this time? Will hand shakes lead to a reconciliation between Catholics and Protestants? I can only pray that it will, but I am not optimistic.

Posted by Shaun Mullen at 8:45 AM
Email ThisBlogThis!Share to TwitterShare to FacebookShare to Pinterest