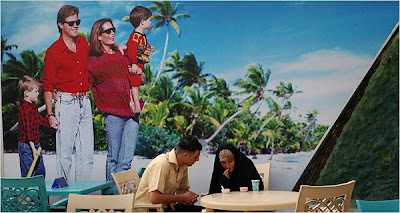 Ice cream shops in the Shiite stronghold of Kadhimiya are flush with sweet-toothed customers. Hospitals have new supplies. Rents have tripled as displaced Shiites flock to the historic district’s spacious homes, while pilgrims stream to the golden-domed shrine at its heart.

Here on the volatile Sunni-dominated west bank of the Tigris River, religious Shiite leaders and their militias have unquestionably consolidated control, transforming Kadhimiya into what could be a model for much of Baghdad if the Shiites have their way.

"This experience in Kadhimiya, you might find it in the future in every neighborhood throughout ," said Sheik Muhammad Bakr Khamis al-Suhail, the white-robed leader of the neighborhood council.

But the future that Kadhimiya points to may not be democratic, inclusive or just, at least by Western standards. Residents and American commanders describe the area as a nerve center for benign and malignant elements of Shiite power, the raw embodiment of the Shiite revival that has swept in the last four years.

It is a place, they say, where militia leaders, Iraqi politicians, criminals and clerics intersect and compete; a place where the Iraqi soldier protecting residents on Monday may be collecting bribes for a militia on Tuesday, praying at the mosque on Friday and firing at American troops over the weekend.

or the average Iraqi, the tradeoff for relative safety is living with a certain level of extortion, political corruption and religious militancy.

Al Hurra television, the U.S. government's $63 million-a-year effort at public diplomacy broadcasting in the Middle East, is run by executives and officials who cannot speak Arabic, according to a senior official who oversees the program.

That might explain why critics say the service has recently been caught broadcasting terrorist messages, including an hour-long tirade on the importance of anti-Jewish violence, among other questionable pieces.

Many of the predictions that Chuck [Hagel] made about how the war might go have come true. A lot of us still believe that some of his early predictions - that this was going to be a very tough project - have proven to be accurate.

Chance can be just as important as calculation in politics, and there is no question that Vietnam would have ended in early 1969 if Robert Kennedy hadn’t been killed a year earlier. Nixon’s election hinged on that national misfortune.

As an anti-war delegate . . . I witnessed a chaotic convention where Eugene McCarthy had become irrelevant and Hubert Humphrey who supported the war was nominated by default. If he had lived, Kennedy would surely have been chosen and gone on to defeat Nixon, whose 20-point lead in the polls fell to less than one percent in the balloting even against Humphrey.

Whatever the self-interest of the next President dictates, the tide of feeling against this war will force him or her to end it sooner rather than later.

Speaking of the guy in the White House, he uttered this gem yesterday: Any attempt by the Democratic Congress to conduct a vote of no-confidence in attorney general Alberto Gonzales would be mere "political theatre," concocted by "actors on the political-theatre stage."

This, from the same guy who perfected the flight suit strut on Mission Accomplished Day, with the event staged at twilight, or, as they call it in Hollywood, "magic hour."

[H]istory — even freshly minted history — has a remarkable way of erasing conventional wisdom. If in 2002 I had written that by 2007 Democrats would be singing Ashcroft’s praises as a man of integrity and sound temperament, I would have been laughed out of the room. Right now, predicting a rehabilitation of George W. Bush elicits similar guffaws from the crowd. But the fact is if Ashcroft can be rehabilitated, anyone can.

But there’s a deeper reason why the popular impeachment movement has never taken off — and it has to do not with Bush but with the American people. Bush’s warmongering spoke to something deep in our national psyche. The emotional force behind ’s support for the war, the molten core of an angry, resentful patriotism, is still too hot for Congress, the media and even many Americans who oppose the war, to confront directly. It’s a national myth. It’s John Wayne. To impeach Bush would force us to directly confront our national core of violent self-righteousness — come to terms with it, understand it and reject it. And we’re not ready to do that.

The first-ever, nationwide, random sample survey of Muslim Americans finds them to be largely assimilated, happy with their lives, and moderate with respect to many of the issues that have divided Muslims and Westerners around the world.

will not extradite [Aleksander] Lugovoi. They have made that clear over the last few months. That puts the EU on the spot. will insist on the extradition and will likely demand that the EU help facilitate it, or to collectively punish economically for their refusal. If the EU does not respond, may well lose enthusiasm for the collective just as the EU wants them to join the common currency. If they do support , they will probably lose their oil imports once again, driving up costs in the EU economy.

Pandering to Putin would be the worst possible mistake for the EU. Expect them to make that choice.

Photograph by Michael Kamber for The New York Times

Blogosphere... wow, that's just a stoopid word. No offense. But please strike it from your vocabulary! Thank you & Have a Pleasant Day!