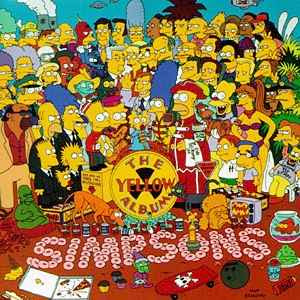 One of the innumerable album cover parodies

* A mono version of the album with a very different final mix was released with the stereo version.

* Tired of touring, the Beatles saw the album as in effect touring for them, and some of the fictional characters on it represent band members. "Billy Shears," for example, is Ringo Starr. The album seems to bristle with drugs references, from "Found my way upstairs and had a smoke. Somebody spoke and I went into a dream" to "four thousand holes in , ," but band members have denied that was the case.

* The animal noises on "Good Morning, Good Morning" were supposedly recorded in the order where each animal would be able to eat the one before it.

Non-U.S. pressings of the album end with a 15-kilohertz high-frequency tone (put on the album at Lennon's suggestion and said to be "especially intended to annoy your dog"), followed by an endless loop of laughter and gibberish made by the runout groove looping back into itself. Two recorded tracks were not released on the album -- "Only a Northern Song," which later appeared on “Yellow Submarine,” and a lengthy free-form track of music and vocals that has never surfaced.

* "Paul is dead" clues proliferate on the cover and in song lyrics.
The album arguably was the last where band members consistently worked together as a group rather than as separate members. The oft-imitated album cover collage depicted more than 70 famous people, including Karlheinz Stockhausen, W.C. Fields, Marlene Dietrich, Bob Dylan, Sigmund Freud, Aleister Crowley, Edgar Allan Poe, Marlon Brando, and Stan Laurel and Oliver Hardy. Two "music videos," actually promotional films shot during breaks in the album recording sessions, were released.
The album was received by critics with almost universal praise. Kenneth Tynan, the esteemed and usually reserved The Times of critic, wrote that it was "a decisive moment in the history of Western civilization." The album was No. 1 for 15 weeks in the and 27 weeks in the It received three Grammy awards. Rolling Stone magazine rated the album as the greatest of the 500 Greatest Albums of All Time in 2003. (The Eurythmics' "Touch" was No. 500.)

* A mint condition pressing of the original mono version of the album on the Parlaphone label fetches about $100.
Posted by Shaun Mullen at 5:21 AM
Email ThisBlogThis!Share to TwitterShare to FacebookShare to Pinterest