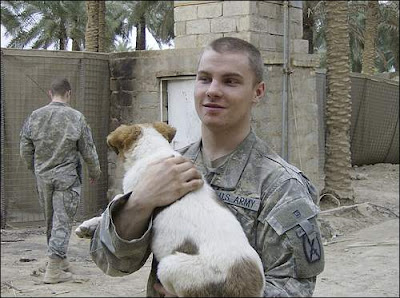 BYRON FOUTY WITH FRIEND IN IRAQ

It will be a somber Memorial Day weekend in with an adopted son still missing two weeks after being kidnapped in Iraq.

Yellow ribbons adorn streetlights and an American Legion memorial. A banner with a photograph of 19-year-old Private Byron Fouty hangs from a wall in the memorial with the words "Our Troops Our Prayers Together We'll Bring Them Home!"

Gordy Dibler Jr. spoke about his stepson, one of three men abducted in the May 12 ambush in the Triangle of Death:

"We have a warrior from our local community . . . that needs our hopes, our thoughts and our prayers for a safe return."

He also asked member of the tight-knit community to also pray for the other missing soldier, Specialist Alex Jimenez of .

About the time the playful boy broke his ankle trying to impress a girl by putting on a cape to fly off a jungle gym.

And the day he came home and saw a chair moving.

"I said, 'Where's Byron?' I leaned over and looked under the table and there he was with a butter knife and an open package of [hot] dogs that he'd been eating."

Among the many community members who listened to Dibler was Georgie Hicks, Fouty's former baby sitter, whom he affectionately knew as Grandma Georgie.

"He was a mischievous little boy. He loved his peanut butter and jelly. He was a delight. It's been real tough."

Added the Rev. Edward Jones of the Center of Light Spirituality Center, who led residents in prayer:

"Byron is a homegrown son, a warrior.

"Eventually we will know his presence and he will be returned to us safe, a new and powerful man and a leader in our community."


* * * * *
Here's an index of previous Kiko's House reports on the ambush and search for the men:

Photograph by Sgt. Michael Morse via The Associated Press