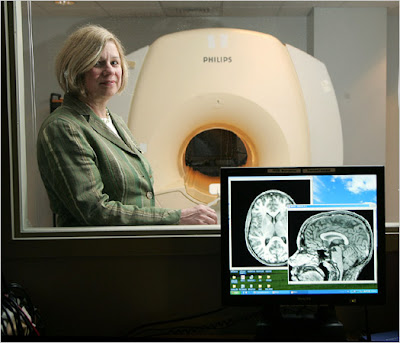 Scientists working with the Defense Department have found evidence that a low-level exposure to sarin nerve gas — the kind experienced by more than 100,000 American troops in the Persian Gulf war of 1991 — could have caused lasting brain deficits in former service members.

Though the results are preliminary, the study is notable for being financed by the federal government and for being the first to make use of a detailed analysis of sarin exposure performed by the Pentagon, based on wind patterns and plume size.

The report, to be published in the June issue of the journal NeuroToxicology, found apparent changes in the brain’s connective tissue — its so-called white matter — in soldiers exposed to the gas. The extent of the brain changes — less white matter and slightly larger brain cavities — corresponded to the extent of exposure, the study found.

I have been slow to comment on the just-passed immigration reform bill because there has been so much going on (I'm all preoccupied with the Iraq hostage thingie) and haven't had a time to actually read it, as opposed to reading about it.

But if the bill has the zenophobic right wing all in a lather, which it most certainly does, then it must be a good thing.

The American people are understandably fearful about another attack like the one we sustained on Sept. 11, 2001. But it is the duty of the commander in chief to lead the country away from the grip of fear, not into its grasp.

-- CHARLES KRULAK and JAMES HOAR
It is too easy—and too partisan—to simply place the blame on the policies of President George W. Bush. We are all responsible for the decisions our country makes. We have a Congress. We have an independent judiciary. We have checks and balances. We are a nation of laws. We have free speech. We have a free press. Have they all failed us? Why has 's public discourse become less focused and clear, less reasoned? Faith in the power of reason—the belief that free citizens can govern themselves wisely and fairly by resorting to logical debate on the basis of the best evidence available, instead of raw power—remains the central premise of American democracy. This premise is now under assault.

Over the past years, the liberal mainstream media has produced gushing tributes to deceased “secular saints” such as Princess Diana, John F. Kennedy, Jr., and Coretta Scott King. It would have been practically sacrilegious for these outlets to air any kind of immediate criticism of such figures. Yet, in the 24 hours or so since the death of Christian conservative leader Jerry Falwell, the mainstream media has given air time to every sort of criticism of the late evangelical. On Tuesday night’s "Anderson Cooper 360," noted atheist Christopher Hitchens launched one of the most vitriolic attacks to date on Falwell. Among the terms Hitchens used to describe Falwell were "ugly little charlatan," "bully," "fraud," and "little toad."

MATTHEW BALAN
Politicians love to talk about how they're "tough on crime." However, one crime that seems to be met with a resounding shrug is men killing their wives, girlfriends, or exs. Domestic violence by men against women, in general, tends to get downplayed in the criminal justice system. Oh, we deny it--we say that we treat these crimes with revulsion and disgust, and punish the perpetrators harshly. But the stats don't lie . . .

-- DAVID SCHRAUB
The real question is why America is structured so that waiters and waitresses can sell feel-good services ("you are a generous tipper and a fine man") to strangers, in return for money. In other words, how did waiters end up as fundraisers . . . ? Most cross-cultural explanations of tipping start with the agency problem between diners and servers ("can you bring my drink now?"), but I believe that is the wrong approach. I view tipping as correlated with effective fundraising in other areas, and Americans as being especially willing to set this additional fundraising arena in motion.


Photograph by Rick Friedman for The New York Times