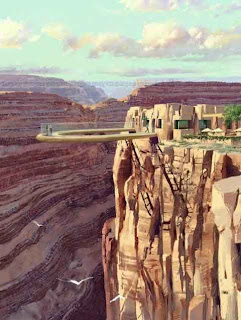 [L]ook more closely at Grand Canyon West, and it is as if the roles of the United States government and the Indian tribes had been inverted or exchanged. The Park Service takes an almost sacred view of the canyon landscape, as if drawing on an imagined Indian conception of the land, striving to protect it from encroaching pressures, noise and commerce brought by nearly five million annual visitors. The Park Service does not permit anything resembling the Hualapai Hummer off-road tours; it has banned helicopter flights below the canyon’s rim, like the ones the Hualapai offer. And it would not permit a permanent horseshoe of steel and glass to protrude into the canyon.

It is testimony to how far our standards have been lowered and how far to the right politics have moved in the Age of Bush that John Ashcroft is being hailed as a hero by some lefties for his refused to endorse the secret domestic spying program.

Some Republicans are angry at Ron Paul, the libertarian presidential candidate, for his forthright stance at the Republican debate earlier this week. When George W. Bush repeatedly asserts unpopular opinions in the face of withering criticism, it's seen as a sign of strength and resolve. But when Paul asserted unpopular opinions in a debate, his remarks became the grounds for derision and threats.

For months, congressional Democrats have tried to force embattled Attorney General Alberto Gonzales out of his job by using what one congressional source called "conventional weapons" -- incriminating E-mails, damaging memorandums, and other documents related to the controversial firings of nine U.S. attorneys. And for months, against the unwavering support of President George W. Bush, they have failed. But last week, the committee investigating the firings detonated what the same source called a "thermonuclear device." And in doing so, they have put Gonzales's future in serious doubt.

Almost six years after 9/11, the substantial failure of the pact with Gen Musharraf is plain for everyone to see. Osama bin Laden remains at large, the Taliban are back in and parts of , the A Q Khan network is believed to be in operation and the one thing the deal was supposed to avoid---severe political instability in nuclear-armed ---is at hand.

One of the key components of rape apologia, whatever its application (that is, from defending rape jokes to defending extreme anti-choice policies), is minimizing the seriousness of rape. Routinely, the rape of women across the board is minimized; men’s rape is taken more seriously, unless it happens in prison, in which case it considered both hilarious and minimized to the point of near total triviality. For victims of rape and victim advocates, one of the most difficult barriers to get past is that rape is either spoken about in the hushed tones of grave shame or the casual flippancy of inconsequence.

To wit, within the past few days there have been three examples I thought were worth pointing out. The first was at the Republican debate the other night in which Senator Sam Brownback (R-Middle Ages) argued against legalized abortion even in cases of rape and incest . .

Brownback engages one of the most typical minimizing tactics of rape apologists when he describes it as “a terrible situation…but.” Many rape apologists will issue the requisite caveat that Rape is Bad, then continue on to speak about it in terms that clearly indicate they don’t really think it’s actually all that bad. It means nothing to say Rape is Bad if the argument that follows isn’t remotely demonstrative of any comprehension that is quite genuinely is bad.