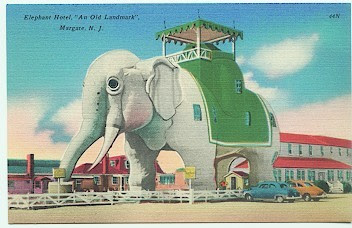 How much is Lucy the Elephant worth? Report doesn't say.

The New Jersey Pine Barrens are known for a lot of things: ghostly legends of a bat-winged Jersey Devil; weekend canoeing among mossy bogs; a place where Tony Soprano and company like to dump their dead.

The Pine Barrens, it turns out, also have an environmental value of about $1,476 an acre a year, based on their ability to provide the earth with water, animal habitat and pollination, according to a report being released today.

The report, by economists commissioned by the New Jersey Department of Environmental Protection, tries to put a dollar value on the state’s natural resources, from the Jersey Shore to the Kittatinny Mountains, to places like, well, Weehawken.

No Republican presidential candidate will be attending Jerry Falwell's funeral.

We all have a different blogging styles and, to be fair to Instapundit, [Glenn Reynolds’] brief, often opaque one-liners can be misleading. But a long look at his archives will reveal the pattern my reader detects. Make your own mind up. My own view is that he holds consistently libertarians views, unless they offend the Republican base, in which case he stays quiet or targets Base enemies. Maybe if he weren't so talented, smart and sharp, these things would not matter to many readers. But after a while, you feel like you're being taken for a spin, not a journey. Thousands of others, it should be noted, strongly disagree - and vote with their mouse-clicks.

Disgraced World Bank president Paul Wolfowitz will still collect his $400,000 performance bonus on June 1st, even though he is resigning over corruption charges.

We cannot expect astronauts to spend three years in a spacecraft and not have sex - of some kind. Probably with each other, and likely in more than one combination. Sex in space presents a number of challenges beyond tangible matters like zero gravity or awkward enclosures. In fact, the physics should be the least of NASA's concerns.

It's the touchy-feely bit that the agency will need to consider seriously. Blindly applying Earth-bound standards that astronauts cannot follow under space-voyage conditions will only lead to guilt and shame. What happens if one person in the spaceship makes a romantic overture, only to be rebuffed? What happens if an astronaut in a relationship back home falls in love with another member of the mission? What to do -- send a breakup text message from Mars?

How do you handle love, sex, romance, heartbreak, jealousy, hurt, unrequited longing, crushes, loneliness and twitterpation when you're 18 months away from Earth and perhaps unsure whether you'll make it back?

jurassicpork said...
This comment has been removed by a blog administrator.
5:50 PM