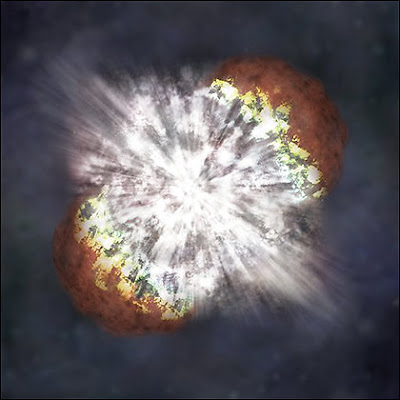 Astronomers have spotted a cataclysmic explosion that marked the death of a huge, distant star in a blast five times as bright and powerful as any they had seen previously. They said yesterday that a similar fate may be imminent for a star in Earth's galactic neighborhood.

The size and energy of the newly recorded blast, 240 million light-years away, have already begun to transform scientific understanding of how especially large stars explode, and have left awestruck researchers concerned -- and a little excited -- about what might happen to the similarly enormous and unstable star closer to home.

They haven’t exactly made a big pronouncement. But clearly the military has moved beyond “Don’t Ask, Don’t Tell.”

The new incarnation seems to be “Don’t Ask, Don’t Listen”

I was relieved when I learned that the Secret Service had been brought in to protect Barack Obama.

Maybe it’s a baby-boomer thing. A colleague of mine, who is roughly my age, told me last week that he too has been fretting about Obama’s exposure, fearing that the first serious black candidate could draw the racists out of the woodwork. Referring to the Secret Service story, he remarked, “I’m happy to see my tax dollars spent that way.”

In similar fashion, I was relieved – at first, anyway – to learn last Friday that the website at CBS News has decided to ban all posted comments about Obama, because of the “volume and persistence” of racist invective. . . . The director of news operations at CBSNews.com put it this way: “It's very simple. We have our rules of engagement. They prohibit personal attacks, especially racist attacks. (Comments) about Obama have been problematic, and we won't tolerate it."

Which is a polite way of saying that a major outlet does not feel any obligation to provide a forum for knuckle-draggers with keyboards.

But, upon reflection, the issues here are more complicated than that. The transparency of the Internet has broadened the range of public discourse, and forced media outlets to think anew about the risks of unfettered free speech and the slippery slope of censorship. Nobody has quite figured out how to put these factors into proper balance. The new CBS policy is one possible solution. But by banning the kind of hate speech that was commonly associated with Jim Crow violence a few scant generations ago, the kind of hate speech that was common at the time of King’s killing, the website is also penalizing the many thoughtful Americans who do want to debate about Obama in a civil manner.

Chevron, the second-largest American oil company, is preparing to acknowledge that it should have known kickbacks were being paid to Saddam Hussein on oil it bought from Iraq as part of a defunct United Nations program, according to investigators.

The admission is part of a settlement being negotiated with United States prosecutors and includes fines totaling $25 million to $30 million, according to the investigators, who declined to be identified because the settlement was not yet public.

[T]here was an elaborate white-tie state dinner at the White House in honor of Queen Elizabeth II and Prince Philip.The menu featured spring pea soup with caviar, sole almondine, spring lamb with chanterelle sauce and local vegetables, and an arugula, mustard greens and romaine salad. For a little light after-dinner entertainment, they brought in a violinist -- Itzhak Perlman, have you heard of him? . . .

In the last few weeks, the sight of journalists yucking it up with celebrities and the people that they cover at annual events like the White House Correspondents' Association dinner (the one where President Bush famously joked about not being able to find weapons of mass destruction) has caused a growing uproar. Last week, the New York Times said its staffers will no longer attend such dinners.

I think there needs to be a debate about whether journalists should attend these fancy state dinners as well. The reason should be obvious. Reporters -- whether they work in , or a small mountain town in -- ought to be the voice of the kind of people who don't get invited to white-tie affairs, the handymen and school teachers, not the politicians and billionaires.