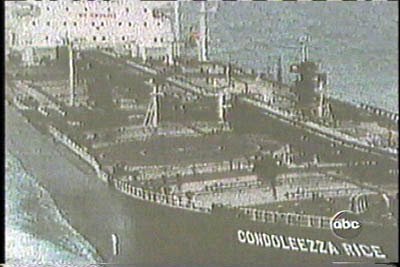 Way back in 2000 when the world was just a wee bit less crazy, Secretary of State-in-waiting Condoleezza Rice was a member of Chevron’s board of directors and head of its public policy committee, which oversaw areas that could be of potential political concern (which is to say embarrassment) for the giant oil company.

That makes the news that Chevron was knowingly paying kickbacks to Saddam Hussein on oil it bought from as part of the defunct U.N. oil-for-food program all the more . . . uh, interesting.

Under a deal being negotiated with federal prosecutors, Chevron would be fined $25 to $30 billion, which is chump change for the ’s second largest oil company.

While my inclination is to suggestion that Condi should be pilloried in Lafayette Park across from the White House, it occurred to me that she was, after all, a sinologist at the time and wasn’t hip to all that Iraq stuff, a pattern which continued after she became national security advisor in 2001.

In fact, by her own admission, she was still fighting the Cold War when that 9/11 messiness occurred.

Incidentally, Chevron had named one of its double-hulled supertankers for Condi in 1995 but renamed it the "Altair Voyager" after catching flak following her nomination to the White House post.
Posted by Shaun Mullen at 5:11 AM
Email ThisBlogThis!Share to TwitterShare to FacebookShare to Pinterest