Iraq: September Will Be the Cruelest Month 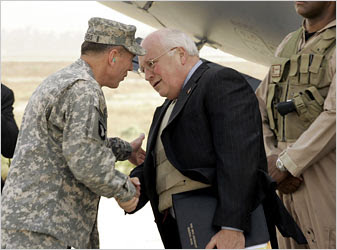 T.S. Eliot famously wrote that "April is the cruelest month," but it may be September for the Bush administration since it increasingly appears that will be when the proverbial finally hits the fan and there is bipartisan agreement that the war in Iraq is lost and it is time to get out.

This moment, or month or whatever, has been a long time coming, of course, and it is George Bush himself who drew a line in the Iraqi sand in declaring in April that General David Petraeus should be given six months to allow the White House's last-gasp surge strategy to work.

The welcome result is that Democrats and Republicans alike are coalescing around the notion that if there is not discernible progress by September, the war is over bar the shouting.

"September is the key," Representative James Moran Jr., a Virginia Democrat and member of a House committee that funds the war, told The Washington Post. "If we don't see a light at the end of the tunnel, September is going to be a very bleak month for this administration."

House Minority Leader John Boehner of , who has steadfastly backed the president, broke ranks in speaking for many fellow Republican congressfolk: "By the time we get to September, October, members are going to want to know how well this is working, and if it isn't, what's Plan B."

There is no Plan B, of course, and never has been, but a September “deadline” has great appeal even if no one has a clue as to what discernible progress might be.

* First and foremost, it puts off the inevitable, which is to say the pain of disengagement. And you had better believe a U.S. withdrawal will be painful, as well as shot through with recriminations to the effect that "Bush Lost Iraq" and its ugly stepson, "Bush Lost the War on Terror," that will reverberate for years to come.

* It provides cover for the president and Petraeus, the commander of forces in , as well as politicians who do not want to appear to be undermining the troops but realize that the war has become a Vietnam-like quagmire.

* Conveniently, October 1 is the beginning of the new federal fiscal year when legislation to continue funding the war would be considered.

* Republicans, already facing the grim prospect of having to run against the Bush legacy in 2008 if they are to draw back independent voters and despairing Republicans to the tattered shreds of the GOP's Big Tent, will be desperate to get the monkey off their backs.

I have suggested that Bush would merely use his September "deadline" to buy time, then argue that still more time is needed for his Forever War, and eventually dump the whole mess in his successor’s lap. That may yet happen.

But the president is mortally wounded:

* U.S. casualties will only increase as the surge goes forward (there have been 27 fatalities in the first week of May alone) and commanders are leaking word that it will take at least until spring 2008 before heightened troop levels make a difference.

* The notion of Iraqi Prime Minister Al Maliki leading a unity government is pornographic, and there is no reason to expect sectarian violence and insurgent attacks to ebb.

* Meanwhile, the cost of the president's catastrophe is closing in on $400 billion and has caused incalculable long-term damage to the military.

"In every one of the four years of the war, Ramadan has brought a spike in violence. If the Petraeus approach is not able to break that pattern, it will be difficult for many members of Congress to continue to argue that progress is being made."

Posted by Shaun Mullen at 6:31 AM
Email ThisBlogThis!Share to TwitterShare to FacebookShare to Pinterest