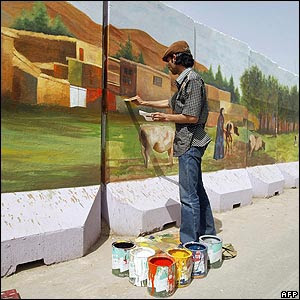 The Admahiya Wall is an in-your-face manifestation of the failure of the U.S. occupation of Iraq, not to mention its stillborn surge strategy. As the map shows, the wall is well on its way to completion -- separating the residents of the predominately Sunnis neighborhood from their predominately Shiite neighbors.

No matter, a number of artists have taken to decorating the wall. More about that here.

The Iraqis do fear nothing now as most of them are unemployed, have no services, can be killed at any moment from the lack of security. We in say "The soaked person fears not from rain" and we are soaked with death and misery for long time. It is therefore time to revolt against all the issues and the occupation which created nothing but misery and terrorism. Let [there] be a revolt from South to North and East to West. There is nothing to loss and if we are dying let every one in our land die with us from the government to the occupying forces and the terrorists.

The time is running against us and let it run against the others as well.

When I come to type down the news coming from , I feel like I'm making up a real bad horror story. But unfortunately, this is the life of a small family in .

Three days ago, my husband sent me a message. He wrote, "Sorry, I have more bad news." My heart immediately sunk. I went on to read, "Amma R's husband died today." I continued to read, "He was really sick and his heart gave out." Ironically, I sighed a sigh of relief. Alhamdulillah, it was a natural death. But even then, the situation in didn't help this middle aged man's health. He went to the hospital the night before his death, but there were no real doctors on call, no one could treat him for a simple ailment. He died the next morning. Allah yirhamuh.

The Iraqi government is a huge disappointment.

Iraq is like an entire country with battered woman syndrome. U.S. forces are like cops responding to a domestic violence case. We have removed the abusive husband, but the wife and children are not "all better" the day their oppressor gets locked up. The family has deep mental and physical wounds that will not disappear overnight. They desperately need care, treatment and time to heal properly. And to compound the problem, the cops have eaten from the fridge, busted the TV, and left the front door open with a broken lock.

It has not even reached parliament, but the oil law that U.S. officials call vital to ending Iraq's civil war is in serious trouble among Iraqi lawmakers, many of whom see it as a sloppy document rushed forward to satisfy Washington's clock.

Opposition ranges from vehement to measured, but two things are clear: The May deadline that the White House had been banking on is in doubt. And even if the law is passed, it fails to resolve key issues, including how to divide Iraq's oil revenue among its Shiite, Kurdish and Sunni regions, and how much foreign investment to allow. Those questions would be put off for future debates.

I have no animosity toward the president. I look forward to when he's out of office, maybe going to a ballgame or something.

A former top CIA official steered an aviation contracting opportunity worth $132 million to a longtime friend, despite his friend's lack of experience in the field, according to federal prosecutors.