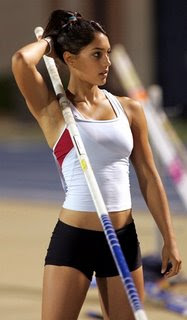 [Allison] Stokke has decided that control is essentially beyond her grasp. Instead, she said, she has learned a distressing lesson in the unruly momentum of the Internet. A fan on a Cal football message board posted a picture of the attractive, athletic pole vaulter. A popular sports blogger in New York found the picture and posted it on his site. Dozens of other bloggers picked up the same image and spread it. Within days, hundreds of thousands of Internet users had searched for Stokke's picture and leered.

The wave of attention has steamrolled Stokke and her family in Newport Beach, Calif. She is recognized -- and stared at -- in coffee shops. She locks her doors and tries not to leave the house alone. Her father, Allan Stokke, comes home from his job as a lawyer and searches the Internet. He reads message boards and tries to pick out potential stalkers.

Of all the many tragic paradoxes of the war, the latest one is arguably the most worrying. Yes, we invaded a country to secure weapons of mass destruction that were not there. Yes, we deposed a man for killing thousands of his subjects, only to unleash murder of innocents on a wider, unstoppable scale. Yes, we invaded to create democracy, but have rendered the concept of democracy in the synonymous with mass death, chaos and anarchy. But the latest twist is a real zinger. A war to defeat terrorism has actually massively increased its prevalence in the last two years, and is now creating a terror-factory to murder more innocents across the globe, including here. That terror factory is Bush's .

One of the things about being profoundly out of sympathy with our present administration is that it has made me much more vividly aware than I ever was before of how extraordinary civilian control of the military is. Think about it: so many people are willing to risk their lives for their country without requiring, in return, any control over when they will be asked to risk their lives, and why. If we were governed by people of immense wisdom and judiciousness, or for that matter by people who were just basically decent and thoughtful, this might be less striking. But to be willing to risk your life whoever governs you -- that's an act of staggering generosity, which, as far as I'm concerned, we can never repay.

Ah, the famous civility of rightwing bloggers. Leading conservatives from Reynolds to Malkin to Hewitt will tell you that civility makes righties better people than the angry liberal mob. Rightwingers never stoop to petty name-calling, they will tell you, and they correct their own on the (vanishingly!) rare occasion when somebody proves them wrong. We even have a commenter who mostly bewails the mean, terribly uncivil Left.
-- TIM F.
To perform "[A] Streetcar [Named Desire]" without cigarettes, or "Twelve Angry Men" without a smoke-filled jury room, is to insult the intelligence of audiences who come to see these well-known plays expecting to see them performed as written. . . . Such a ban isn’t unconstitutional — but it’s stupid, which is even worse. It makes look like a backwoods burg full of philistine pols with nothing better to do than mind other people’s business. . . . [S]ince when did Carl Sandburg’s City of the Big Shoulders turn into ? As for those Chicagoans who don’t care to have their nostrils brutalized by the smell of a lone cigarette burning halfway across a crowded theater, they have an inalienable right of their own — the right to head for the nearest exit. I urge them to exercise it and leave the actors to go about their stage business undisturbed.
-- TERRY TREACHOUT

Posted by Shaun Mullen at 5:04 AM
Email ThisBlogThis!Share to TwitterShare to FacebookShare to Pinterest