Quotes From Around Le Blogosphere 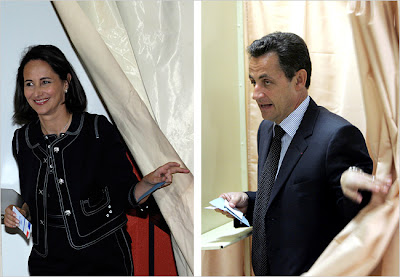 In honor of the French presidential election, I had a side order of French fries with a pressed roasted vegetable sandwich at a Cuban restaurant in New York on Sunday. It was the least I could do as an American who was diffident about the balloting but smart enough to know that looking down on France, as screwed up as it is, only invites comparisons to how screwed up the United States is.

-- SHAUN MULLEN
A staggering 85 percent of voters turned out. It's too early to know if Sarkozy really will tackle 's welfare state and alienated Arab immigrants, and the EU's sclerosis. And much will depend on the looming parliamentary elections. But Sarko is as close to a classical liberal in economics as you are likely to find in 21st century European elites, and hope springs eternal. Sarko is not the racist caricature that some have painted. He's to the "left" of Segolene, for example, in favoring affirmative action for racial minorities. But he does symbolize a unashamed of itself, its culture, and its resistance to the Islamist wave sweeping immigrant communities as well as allied Arab countries.. . .

My gut tells me to expect more from Sarko rather tha less. In foreign policy, that's almost entirely a good thing. Sarko is not a visceral anti-American, unlike many of his peers. In that sense, we have gained a new and stronger ally in the war against Islamism. Now to make that war more effective and intelligent.

Mr. Sarkozy has still not quashed self-serving claims by Socialist opponents that his policies are divisive – claims that were given superficial credence by his courting of Le Pen voters, his insistence on a new French patriotism and proposals for tough new immigration controls. . . .

He knows, however, as do most of his supporters, that the real problem in the febrile suburbs is not racism or discrimination but unemployment. The shamefully high level of joblessness among all the young, and especially those of immigrant origin, is a main factor in the alienation of many young people and the emigration of the brightest. It is here that Ms. Royal fatally failed to convince the country that her policies – which amounted to yet more state intervention and protection – would ever create the jobs and flexibility desperately needs. A priority for the new President is to push through urgent measures to get back to work: this includes tax cuts, a law on strike reforms and other proposals that he hopes to put to an emergency session of parliament in July. turned out in huge numbers to vote for change. President Sarkozy now has to move fast to deliver it.

Let the finger-pointing begin. Ségolène Royal’s defeat on Sunday night left the French Socialist party in disarray and searching for someone to blame. There is hardly a shortage of scapegoats.

It is the party’s third consecutive presidential defeat. The Socialists now face the question of whether they can ever regain power without ditching their anti-capitalist rhetoric, as the mainstream left has done across almost all of .