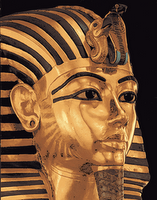 Scientists believe they have solved the mystery surrounding a piece of rare natural glass at the centre of an elaborate necklace found among the treasures of Tutankhamun, the boy pharaoh.

They think a fragile meteorite broke up as it entered the atmosphere, producing a fireball with temperatures over 3,000 degrees Fahrenheit that turned the desert sand and rock into molten lava which became glass when it cooled.

Experts have puzzled over the origin of the yellow-green glass — carved into the shape of a scarab beetle — since it was excavated in 1922 from the tomb of the teenage king, who died about 1323 B.C. It is generally agreed that it came from an area called the Great Sand Sea but there has been uncertainty over how it was formed because there is no crater to back up the idea of a meteorite strike.

Posted by Shaun Mullen at 3:38 PM
Email ThisBlogThis!Share to TwitterShare to FacebookShare to Pinterest