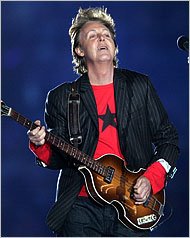 I'm just starting to get a grip on the growing old thing. I'll be a ripe 60 next year, but don't know what it's like to feel that old, let alone 59, because I feel like I'm years younger. But I do know that it seems like an awful lot of the people whom I idolized when I was a mere youth are marching into their own dotage just a few steps ahead of me.

Like Paul McCartney. Sam Roberts filed this delightful story about Sir Paul and the growing old thing for The New York Times:

In 1942, when James Paul McCartney was born in Liverpool, the average life expectancy of a British infant boy was 63 years. Notwithstanding those expectations and the greatly exaggerated rumors of his death decades ago, Mr. McCartney turns 64 on Sunday, Father's Day.

He was a teenager when he wrote the tune for "When I'm Sixty-Four," and only 24 when the Beatles recorded it in 1967 for "Sgt. Pepper's Lonely Hearts Club Band." But just as George Orwell's "1984" proved to be an abiding prophecy of a dystopic future for so many impressionable readers, Mr. McCartney's lyrics delivered to a self-consciously youthful generation an enduring if satirical definition of what their golden age might be like "many years from now."

Today, many of those who embraced that quaint vision of enduring love, caring, knitting and puttering in retirement — "Will you still need me, will you still feed me, when I'm 64?" — couldn't have been more wrong.

And judging by his personal life, Mr. McCartney missed the mark, too. The song's promise of retirement with a longtime partner has proved, at best, bittersweet for him. Last month, he announced his separation from his second wife, Heather Mills, who is 38. "Will you still need me?" indeed. Since 1967, American divorce rates per capita have more than doubled (three-quarters of men married in the late 1950's celebrated their 20th wedding anniversaries with their first wife, compared with about half who married in the early 1970's).

A smaller proportion of Americans older than 65 are poor today, but more delay retirement because they want to, or have to. More of the better-off own their vacation homes outright (never mind renting "a cottage in the Isle of Wight, if it's not too dear"), while the less well-off who own homes have the newly popular option of reverse mortgages.

Americans live longer today (technically, no one has died of old age since 1951, when the government dropped that official cause). They also age more slowly, or so they say. Half the over-65 population define themselves as middle-aged or even young, though a greater proportion today are likely to be perilously overweight.

Yet the song still resonates. Julian Lennon, John's son, sang it in an Allstate Insurance commercial in 2002. When Paul Simon turned 64 last year, Mr. McCartney called and serenaded him with it.

According to most accounts, Mr. McCartney wrote the lyrics for his father (his mother had died of breast cancer when he was 13) and the song was recorded not long after the elder McCartney turned 64.

"While it may have been done tongue in cheek," said Bruce Spizer, a Beatles biographer, "life began to imitate art."

Mr. McCartney's first wife, Linda, died in 1998 at 56, of breast cancer; they had been married 29 years. "The bliss of being with a lifelong partner, as expressed in 'When I'm Sixty-Four,' was shattered by Linda's tragic death," Mr. Spizer said. "The little things expressed in the song, such as working the garden and going for a Sunday morning drive, were part of his life with Linda."

The writer Gail Sheehy, who, at 68, is still guiding readers through life's passages, said today's 64-year-olds have a "360-degree view of life." They may believe in yesterday, but they also can't stop thinking about tomorrow. Thanks to seasoning (and Viagra), males are not necessarily half the men they used to be.

Mr. McCartney, who recently appeared on the cover of AARP magazine, does not appear to be losing his hair yet, despite the song's augury. He has three grandchildren (not the song's "Vera, Chuck and Dave"). He is also the father of a 2-year-old daughter. And while he may not be living his own lyrical vision, Mr. McCartney seems closer to fulfilling Bob Dylan's "Forever Young" than Pete Townshend's "Hope I die before I get old."

Now a billionaire, he has said he has no plans to retire, either as a rock star or as an animal-rights advocate (although, at 65, he will be entitled to a basic pension from the British government, at least $156 a week, and a free transit pass).

This year, the first baby boomers turned 60. About 2.7 million other Americans observe their 64th birthdays in 2006, including Muhammad Ali, Erica Jong, Larry Flint, Garrison Keillor, Michael Bloomberg, Harrison Ford, Ted Kaczynski and Barbra Steisand. (Ringo Starr, the only other surviving member of the Fab Four, will be 66 next month; John Lennon was murdered at 40 in 1980; George Harrison died of cancer at 58 in 2001.)

"The slogan back then was 'Never trust anyone over 30,' " recalled Jeff Greenfield, the CNN commentator, who is 63. "We thought people would be dead or in a home by their 60's."

Today, on average, 64-year-olds can expect to live more than 16 years, about 4 years longer than 64-year-olds could expect in 1967, according to government statisticians (and, hey, an editor of the Centers for Disease Control and Prevention's Morbidity and Mortality Weekly Report, Jude Rutledge, was named for another of Mr. McCartney's songs).